I spent the day at the Romantic Times conference in Los Angeles, starting with the Mystery Chix and Private Dix breakfast. Before the breakfast, a bunch of us authors got together for an hour or so and had a private, round-table chat about the fast-moving changes in the business and the rise of ebooks. That conversation — with Rhys Bowen, Doug Lyle, Brett Battles, Sue Ann Jaffarian, Lori Armstrong, Robert Gregory Browne, Dianne Emlley, and Doug Lyle —  was worth the trip by itself.

To kick-off the breakfast, attended by a couple hundred romance & mystery readers, I interviewed Bill Link, co-creator of COLUMBO, and then joined my fellow authors in a raffle of our books.

My next gig was a panel on the business of Hollywood with author Stephanie Bond and development exec whose name escapes me (is this a sign of creeping senility?). He was a very nice guy, but he said something I strongly disagreed with. A woman asked the panel what the best way was to present her novel to a  development exec for consideration as a movie or TV series.

"Make a book trailer," he said, adding that was the only way to really grab the attention of his bosses and convey the feeling of the book. 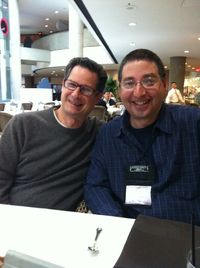 He was a very nice guy… but God, what incredibly bad advice. What the development guy was basically saying was that his boss had the attention span of a 2 year-old, or was illiterate, or was just plain lazy. If the execs at his company can't be bothered to read a punchy paragraph or two, fuck them. You don't want to be in business with people who don't know how to read.

On a more practical note, the only book trailer most authors are capable of producing is going to be a bunch of stock photos, some stock music, and some simple text, all badly edited together into a dull mish-mash. How is that going to put the best spin on your book?  Besides, you're authors, not film-makers. Your job is to write a great book and maybe a good summary your agent can use to sell it to Hollywood. If the boss can't envision the movie from the book or summary without an amatuer trailer, the dimwit has no imagination…another reason not to be in business with them.

But it was a lively, fun panel and, outside of that one comment, which I kept making fun of, the development guy gave a lot of really good advice.

I grabbed a quick lunch with my buddy Ken Levine, who was meeting two of his fans, authors Beth Ciotta and Mary Stella, then went off to lead a two-hour seminar on TV writing, which was a lot of fun. Afterwards, I had a long talk with Barry Eisler about the epub biz, which we'll continue over breakfast on Saturday.

All in all, a very busy, and very enjoyable. day.