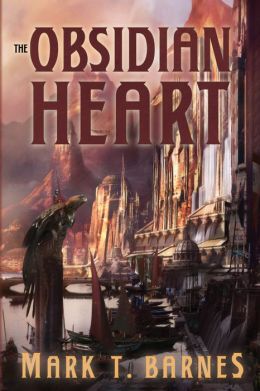 My friend Mark Barnes’ new novel The Obsidian Heart is a character and plot driven story, as much political thriller as fantasy adventure. It’s the second novel in his lyrical Echoes of Empire series, an epic, fantastic tale of family loyalty and political intrigue, fraught with shadowy visions, baroque magic, arcane science, bloody feuds, and ancient forces whose agendas are as yet unknown. I invited him here to talk about what he learned while writing the second novel in his series.

It’s been said that the second novel is the hardest, and the one where a number of authors stumble. Inexperienced as I may be, I’d challenge that to say the novel you’re working on should be the hardest, because you want to improve in some way on what you’ve done previously. I looked at the second novel as a blessing, and a curse. A blessing, because this time I was being paid to do what I loved, to share more of my story with readers, and to get better at what I did. A curse, because I had to do all that while the clock was ticking, adding demands on a life that was already reasonably full.

When I signed a contract, the landscape changed. I was no longer working for myself, and had an obligation to complete my work within an established time frame, to an acceptable level of quality that wouldn’t cause my agent to facepalm, or give my editors a stroke. It reminded me a little of the warning you see on the side mirrors of your car: deadlines in the mirror are closer than they appear. In this case, three books released in a 12 month period.

By the time I broke ground on The Obsidian Heart, I was in the position where the first novel, The Garden of Stone, had been written and edited, but not released. The foundation for everything that was yet to come hadn’t been seen by the public: there were no reviews, and at this point no feedback on the project other than an enthusiastic agent, and publishing team. That support helped ferry me across rivers of doubt and second-guessing. But I was writing in a vacuum with regards to the response of paying readers. The only option was to continue with the story I wanted to tell, with the characters I’d become more familiar with, but to leverage from the lessons learned in the writing and editing process.

With The Garden of Stones, I had a detailed story plan that described everything. Writing The Obsidian Heart, I relied less on a rigid structure, and leaned more towards an organic experience where I strayed from the plan as the story grew, and characters evolved. This came from a greater familiarity with the world, the story, and the characters, as well as the knowledge that my work was going to be seen in the wild. My first readers had the impression that I enjoyed writing The Obsidian Heart more than I did The Garden of Stones: a shared view that I was more relaxed, and focused more on telling a story, than writing a novel. Such is true, because the pressure of getting published was no longer a millstone; it was replaced with the challenge of telling a better story, and being a better writer, which was more enjoyable Some of the things I found useful in the journey of writing the second novel were:

I’m writing this a week after the release of The Obsidian Heart, and early reviews and reader responses have been great. Here’s hoping it stays that way. I’d enjoy the ongoing opportunity to give readers the kinds of stories and characters they care about, in worlds they love.