I opened up to CrimeReads about my addiction to Ralph Dennis’ amazing HARDMAN novels and how it led me to launch a publishing company, Brash Books, with Joel Goldman. Here’s an excerpt:

My expensive, life-changing addiction began six years ago when a man approached me in a nameless hotel in a city I don’t remember.

“You’re really going love this,” Bill Crider said, almost in a whisper. “And I’m not going to let you leave here until you buy it.”

We were standing in front of a used bookseller’s table at a writer’s conference. I looked down and saw that Bill was holding a yellowed, brittle paperback out to me. It was entitled Hardman #1, The Charleston Knife is Back in Town by Ralph Dennis. The slug line across the top of the cover read “Brace yourself for broads, bullets, and bare-fisted action!” 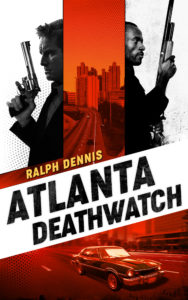 It was obvious from the numbered title that it was one of those cheap, men’s action adventure paperbacks, a genre I knew well, having written, under the pseudonym “Ian Ludlow,” a series called .357 Vigilante in the mid-1980s for the same publisher that released this book. While there were some gems in the genre, most of them were hack work, badly written excuses for explicit sex and graphic violence that were sold in grocery store spinner racks nationwide. And a book called “Hardman”—wink, wink, nudge nudge—promised to be among the worst of them.

Bill must have seen the skepticism on my face so he smiled and said, “Trust me. You won’t regret it.”

This is how it often is with pushers. Have a taste, they say, it won’t hurt you.

And Bill was particularly good at pushing old paperbacks and forgotten authors. He was a kind, decent, warm man, an acclaimed author, and an expert on crime fiction. People trusted him. I trusted him…

I think you’ll enjoy the essay… and I strongly, enthusiastically, passionately recomment that you check out the HARDMAN novels.

2 thoughts on “My Harrowing Addiction”