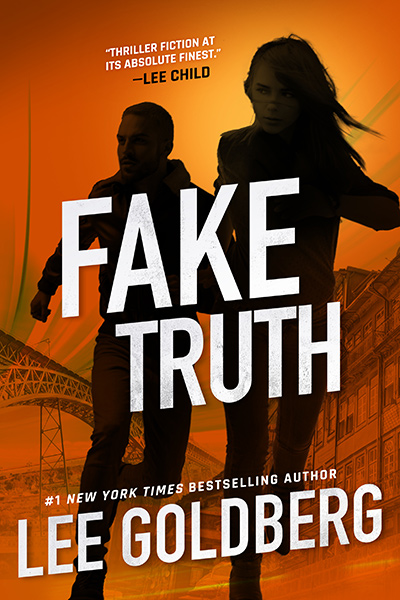 Control the media. Control the world. The only person who can save us from global catastrophe is thriller writer Ian Ludlow in #1 New York Times bestselling author Lee Goldberg’s exhilarating new novel.

Author Ian Ludlow writes great adventures…but after helping Chinese movie star Wang Mei defect to the United States, he becomes the accidental hero of a real-life espionage thriller. Now he’s stuck with the actress, and suffering a nasty case of writer’s block, when he stumbles into a secret Russian plot using “fake news” to outrage Americans into believing a terrifying lie.

It’s up to Ian and Margo French, his researcher-turned-spy, to discover the connection between a barbaric drug lord in Mexico, a homicidal rapist in California, a rogue citizens army in Texas, a raging TV pundit in New York, and two dead tourists in Portugal…before the President of the United States makes a catastrophic mistake that could resurrect the Soviet Union. The only weapon Ian has against the global conspiracy, and the assassins who are closing in on him, is his vivid imagination. If his story isn’t a killer thriller, he’s dead.

“Hilariously surprising. The author’s juggling of truth and fiction is almost as dexterous as his hero’s” Kirkus Reviews

“Delightfully outrageous. There are shootouts, bombings, car chases, and plenty of almost slapstick—but still murderous—mayhem. There are hilarious lines, too. For readers who enjoy madcap action. And a good laugh” Booklist

“Fake Truth promises to be the most over-the-top, electrifying book in the series so far—making it a no-brainer for readers looking for a fun and thrilling read.” The Real Book Spy