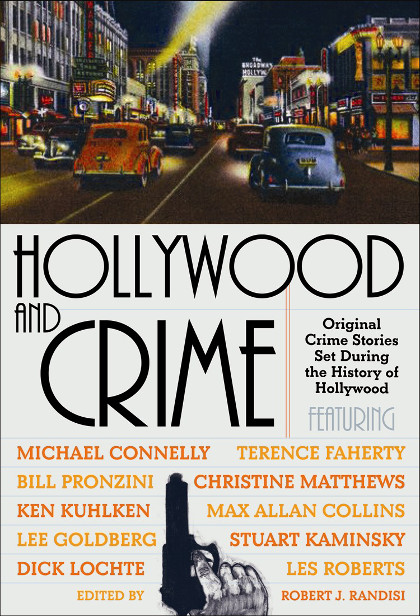 “As veteran crime writer Randisi notes in his introduction, when some people think of Hollywood, they think fame, glamour, and Disneyland. Others think of the Black Dahlia, O. J., and Fatty Arbuckle—the dark side of the Tinseltown dream. Among the authors represented in this collection of original short stories with a Hollywood theme are marquee names Michael Connelly, Max Allan Collins, Bill Pronzini, and Stuart Kaminsky. Among the best of the 14 selections are Collins’ Murderlized, featuring Moe Howard of Three Stooges fame investigating the death of his mentor, and Connelly’s Suicide Run, in which Harry Bosch extracts justice for a series of murdered starlets. Veteran television screenwriter Lee Goldberg has some fun with a small screen legend in Jack Webb’s Star, and Dick Lochte brings back private investigator Leo Bloodworth—still listening to Dinah Shore but on an MP3 player—in a mystery that ends with a devilish poke at the quality of modern screenwriting. This consistently high-quality collection offers readers a nice mix of big names and lesser-knowns who deserve larger audiences.”
—Booklist

“The 14 stories in this entertaining anthology from Shamus Award-founder Randisi span Tinsel Town history from the 1930s to the present and intersect, literally, at Hollywood and Vine. Top billing should go to Michael Connelly’s Harry Bosch story, Suicide Run, and to Lee Goldberg’s Jack Webb’s Star—the former for the detection and the latter for biggest laughs. Other highlights include Max Allan Collins and Matthew V. Clemens’s reinvention of one of the Three Stooges, Moe Howard, as a detective in their clever Murderlized, about the 1937 death of the Stooges’ mentor, vaudevillian Ted Healy. Robert S. Levinson delivers a wicked portrait of gossip columnist Hedda Hopper in And the Winner Is…, which turns on her lackey’s efforts to stop a Nazi sharpshooter at the 1960 Academy Awards. From Harry Bosch’s visit to a photographer at Hollywood & Vine Studios to Moe’s meeting at a coffee shop at that intersection, all the tales pay homage to the storied Hollywood street corner.”
—Publishers Weekly

“Lee Goldberg’s Jack Webb’s Star, is a riotous caper crime with a nasty twist that starts in a traffic school class in the Taft building, where among the offenders is a hapless man ticketed for drunk driving in his wheelchair…”
—Los Angeles Times

“Show business has long been a favorite criminous setting, and in recent years more mysteries than ever have explored the worlds of film, stage, television, music, magic, stand-up comedy, and other categories of performance. Prolific anthologist Robert J. Randisi’s Hollywood and Crime (Pegasus, $25) gathers original stories by such formidable writers as Michael Connelly, Bill Pronzini, Terence Faherty, Stuart M. Kaminsky, and Dick Lochte. Among those with the strongest entertainment industry backgrounds are Murderlized by Max Allan Collins and Matthew V. Clemens, a fact-based 1930s tale in which Moe Howard of the Three Stooges investigates the mysterious death of former stage partner Ted Healy; Robert S. Levinson’s And the Winner Is, about the 1960 Academy Awards, gangster Mickey Cohen, and the bitter rivalry of columnists Hedda Hopper and Louella O. Parsons; and best of all, Jack Webb’s Star, Lee Goldberg’s hilarious contemporary tale of a struggling TV writer, his commercial actress wife, a traffic school led by an unfunny stand-up comic, and Joe Friday’s star on the Hollywood Boulevard Walk of Fame.”
—Jon Breen, Ellery Queen Mystery Magazine

“Thanks to the works of Raymond Chandler, Ross Macdonald, Stuart M. Kaminsky and so many other authors, as well as TV crime dramas and films, Los Angeles and detective fiction may be permanently pared in the public mind. And no sector of L.A. has received more attention from this genre than Hollywood, which offers both an abundance of glitz and the possibility of gore. Editor Randisi solicited more than a dozen familiar crime-fictionists to contribute their own Tinseltown tales to this volume. Among the best are Lee Goldberg’s clever Jack Webb’s Star, Michael Connelly’s Suicide Run, and Murderlized, in which Max Allan Collins and Matthew V. Clemens send one of the Three Stooges, Moe Howard, off to investigate the death of that comedy trio’s mentor.”
—J.K.P., January Magazine