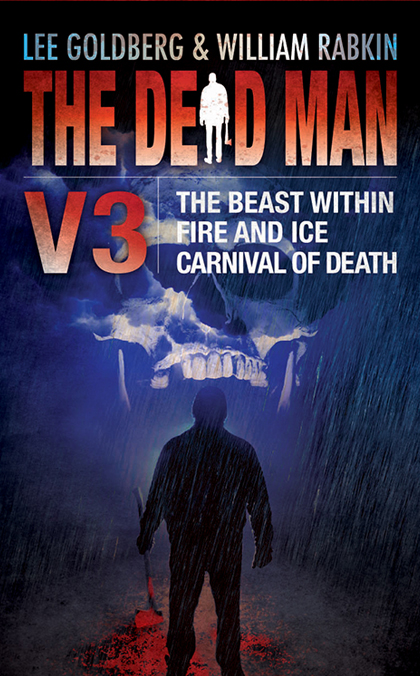 After dying in a freak accident, Matt Cahill inexplicably “wakes up” three months later with the disturbing ability to see things—terrible things—that others cannot. Drafted as a warrior in the battle between good and evil, Matt will stop at nothing to destroy the malevolent Mr. Dark. In The Dead Man Volume 3, a trio of sinister new stories tracks the reluctant hero on his nightmarish quest.

Matt’s search for a paranoid visionary who claims to have defeated a supernatural entity like Mr. Dark leads him deep into the Michigan woods. But when he finds himself trapped in a bloody siege between warring factions, his only hope for escape from an unstoppable advance of mayhem, carnage, and black magic is to trust his instincts, grab his ax, and unleash the ferocity of The Beast Within.

In Fire and Ice, a disgruntled ex-employee at a chemical company walks into the plant and starts shooting, trapping Matt and four other workers inside. As the body count rises, Matt realizes the shooter has a much bigger, deadlier plan in mind, one that could leave thousands dead. And just when he thinks the day can’t get any worse, the cunning Mr. Dark raises the stakes to horrifying heights.

Hungry for respite from his solitary mission, Matt takes a gig working security at a traveling carnival. But it doesn’t take long for him to realize that something isn’t quite right. Sure enough, a series of violent events rocks the carnival and a charlatan’s dark prophecies suddenly begin coming true. So when she foresees imminent doom, Matt knows it can only mean one thing: Mr. Dark is here, and it’s not for the cotton candy…it’s to ignite a bloody Carnival of Death.