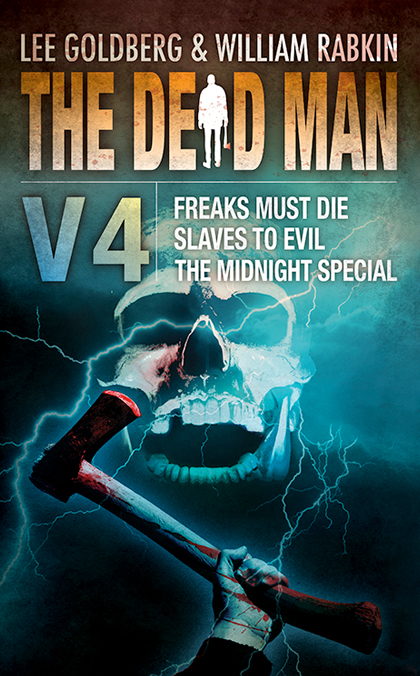 After dying in a freak accident, Matt Cahill inexplicably “wakes up” three months later with the disturbing ability to see things—terrible things—that others cannot. Drafted as a warrior in the battle between good and evil, Matt will stop at nothing to destroy the malevolent Mr. Dark. In The Dead Man Volume 4, a trio of sinister new stories tracks the reluctant hero on his nightmarish quest.

On a quest to find a kidnapped child, Matt discovers an underworld of people with uncanny powers living in the shadows of New York City, trying to elude a ruthless force that’s vowed that the Freaks Must Die. Matt must run a deadly race against time to save the child, and the entire “freak” community, from bloody annihilation.

Matt goes to a town where all the cops are corrupt Slaves to Evil, terrorizing everyone and allowing crime to run rampant…but before he can battle them, he’s shot by a gun-toting teenager out to avenge Matt’s killing of her brother. Now Matt is trapped between hordes of deranged, killer cops and an innocent girl hell-bent on revenge.

The re-release of a cheesy 1970s zombie flick is sparking horrific bloodshed whenever it’s screened…and Matt Cahill is determined to stop it. His quest takes him to a grindhouse theatre in L.A., where a screening of The Midnight Special begins a night of unmitigated terror that will either put an end to Mr. Dark’s reign of evil…or mark a blood-soaked new beginning.