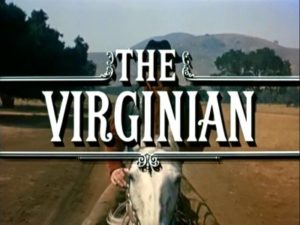 The good folks at the Classic TV History blog are doing God’s work. They’ve just done their second, in-depth interview with TV writer-producer David Levinson, whose many credits include THE BOLD ONES: THE SENATOR, SARGE, CHARLIES ANGELS, HART TO HART, NIKITA and scores of other shows. It’s a long, detailed, terrific interview filled with fascinating anecdotes about the writing and production of the various series that he’s been associated with over his long, varied career. It doesn’t matter whether you know the shows that he’s worked on or if you liked them — this is gold for anybody interested in TV history or in a career in television.  I loved every word of the interview. Levinson has been around a long time and he’s got some great stories, like this one about an episode of THE VIRGINIAN…

Oh, this is good.  By the way, I was a total asshole about this.  This is my second season on the show as a producer.  I’m like 27 years old.  I’d done like four episodes the season before, and I wanted desperately to do a show about black cowboys.  I talked to a writer by the name of Norman Jolley, and we’d come up with a really good story about a cowboy who had worked his whole life to save up the money for his son to go to college, and then he got ripped off.  In order to get his money back, he falls in with a bunch of rustlers to steal the cows from John McIntire’s ranch, and bad things happen.

Nowhere in the script did it mention that the father and son were black.  Just the character names.

Everybody liked the script, and I go in to see the executive producer, and he says, “Who are you thinking of casting?”

I said, “I want to cast James Edwards.”

There’s this long pause, and the executive producer – who, by the way, was the nicest fellow you’d ever want to meet: Norman Macdonnell, who had produced Gunsmoke all those years – looked at me and said, “Isn’t he black?”

Very gently, he explained to me that we had a primarily redneck audience and you just couldn’t cast a black man as the guest star in one of the shows.  I said to him, “Well, listen, you’re the boss, and if that’s the way you feel, that’s what we’ll do.  But I feel it only fair to tell you that I’m going back to my office and calling The New York Times and The L.A. Times to tell them about this conversation.”

He came up from behind the desk, and he was a big guy.  His face was totally flushed and he looked at me and said, “You little cocksucker.”

And we cast Jimmy Edwards.  The show went on the air.  There were no letters.  Nobody fucking noticed that there were two black actors playing the leads in this show.  But shortly thereafter I left The Virginian.

No surprise. But the real pleasure of the interview with Levinson aren’t dramatic moments like that but the meat-and-potatoes stuff about the making of TV. I strongly recommend the interview… and everything else on the Classic TV History blog, especially their incredible Oral History of THE SENATOR, which is better than a lot of TV books that I’ve read.

THe Virginian became The Men from Shiloh