Brian Drake conducts an indepth interview with my buddy Paul Bishop, who has just reissued all of his terrific crime novels as ebooks (some under new titles). Paul is a veteran LAPD detective and an interrogation expert (also the star of ABC's upcoming reality show Take the Money and Run) who brings that experience to his books. But, like Joseph Wambaugh before him, he writes more than simple police procedurals.  In the interview, he talks in detail about how the characters in his books are shaped, in particular his series heroine Fey Croaker.

BD: Fey Croaker is a great character in her Detective Fey Croaker L.A.P.D. Novels. Was there anyone in particular who inspired her?

PB: All of my long-term partners on the job have been female.  I learned a ton from all of them.  In my opinion, the average woman in law enforcement is much better than the average man – and yes, I know saying that is sacrilege to many.  Women on the job are natural problem solvers and can instinctively deescalate potentially violent situations far quicker and easier than their male counterparts because they are not hung up on their own machismo.

Working for so many years with female partners, I saw firsthand how they were mistreated by bureaucracy, how every time they turned around they were being hit on sexually.  It got to the point where I’d heard every pick-up line in the book a hundred times used on my partners.  I got really tired of it, so I had some inkling of how they felt.

I also came to understand why female cops have a very hard time sustaining personal relationships outside of the job.  And through investigating sexually related crimes for thirty plus years, I came to believe the majority of females have some kind of sexual abuse – almost always unreported – in their background.  This was inside knowledge, and I wanted to bring it to the character of Fey Croaker. 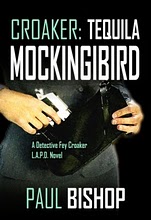 Before I had even started writing the first book, I had plotted out a four book story arc for Fey’s personal life.  I knew each book would contain a standalone plot, but would also be designed to isolate Fey more and more personally, before forcing her to deal with her demons in the fourth novel.

So, Fey is a combination of many of the great female detectives with whom I’ve had the honor of working.  And the best feeling was when I would be approached by female law enforcement officers who had read the book and demanded to be told how I knew this stuff – it meant I’d gotten it right.

That's not all he gets right. If you're looking for great summer reading, do yourself a big favor and pick up a Paul Bishop novel.