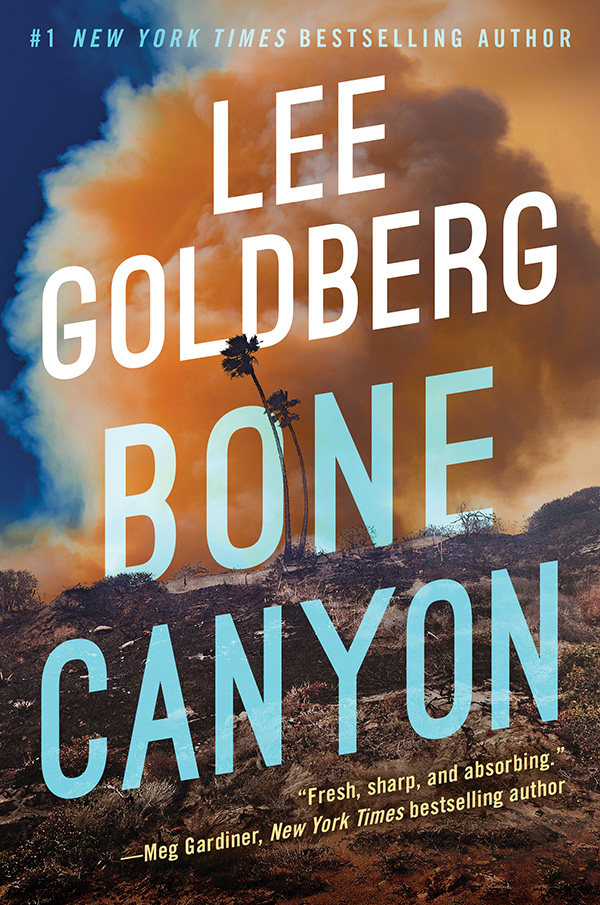 A cold-case heats up, revealing a deadly conspiracy in a twisty thriller by #1 New York Times bestselling author Lee Goldberg.

A catastrophic wildfire scorches the Santa Monica mountains, exposing the charred remains of a woman who disappeared years ago. The investigation is assigned to Eve Ronin, the youngest female homicide detective in the Los Angeles County Sheriff’s Department, a position that forces her to prove herself again and again. This time, though, she has much more to prove.Bones don’t lie and these have a horrific story to tell. Eve tirelessly digs into the past, unearthing dark secrets that reveal that nothing about the case is as it seems. With almost no one she can trust, her relentless pursuit of justice for the forgotten dead could put Eve’s own life in peril.

“Bone Canyon is a propulsive procedural that provides high thrills in difficult terrain, grappling thoughtfully with sexual violence and police corruption, as well as the minefield of politics and media in Hollywood and suburban Los Angeles. Eve Ronin is a fantastic series lead—stubborn and driven, working twice as hard as her colleagues both to prove her worth and to deliver justice for the dead.”
—Steph Cha, Los Angeles Times Book Prize finalist for Your House Will Pay

“Wow—what a novel! It is wonderful in so many ways. I could not put it down. Bone Canyon is wrenching and harrowing, full of wicked twists. Lee Goldberg captures the magic and danger of the Santa Monica mountains and the predators who prowl them. Detective Eve Ronin takes on forgotten victims, fights for them, and nearly loses everything in the process. She’s a riveting character, and I can’t wait for her next case.”
—Luanne Rice, New York Times Bestselling Author

“Lee Goldberg puts the pro in police procedural. Bone Canyon is fresh, sharp, and absorbing. Give me more Eve Ronin, ASAP.”
—Meg Gardiner, author of The Dark Corners of the Night

“The tension ratchets up in this fast-paced police procedural, which addresses sexism, cronyism, and corrupt officers, while also dealing with the investigative process. Goldberg follows Lost Hills with a riveting, intense story. Readers of Karin Slaughter or Michael Connelly will want to try this.”
—Library Journal STARRED Review

“Goldberg delivers three of my favorite things: a fast-paced police procedural, a strong female character, and just a touch of snarky humor. Crime fiction can often be very dark, and this one stands out not just for the mystery, but for the whip-smart delivery.”  Melinda Leigh, Wall Street Journal bestselling author

“The discovery of a homicide victim’s scattered bones in the aftermath of a wildfire plunges Eve Ronin, the ‘youngest homicide detective in the history of the Los Angeles County Sheriff’s Department,’ into a politically tense, risky murder investigation in bestseller Goldberg’s fast-paced sequel to 2020’s Lost Hills. Readers will cheer the determined Eve every step of the way as she strives for justice. Goldberg knows how to keep the pages turning.”
—Publishers Weekly

“Goldberg’s characters are engaging and well-drawn…the tale is fast-paced, and the author accurately depicts investigative practices, making for another first-rate police procedural.”
–Associated Press
“Goldberg’s pacing and plotting are both pitch perfect, and his command of the story places him at the top of modern-day California crime writers staking a claim to the mantle of Raymond Chandler and Dashiel Hammett. Bone Canyon is destined to be the first great mystery of 2021″
-Providence Journal

“Goldberg is clearly a fantastic storyteller.”
—The Nerd Daily

“Mark this one down as a page-turning thriller that is not to be missed.”
-The Real Book Spy