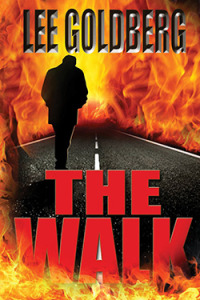 “Can books be better than TV? You bet they can — when Lee Goldberg’s writing them. Get aboard now for a thrill ride.”  Lee Child

“Leaves you guessing right up until the heart-stopping ending,” Lisa Gardner
“Lee Goldberg can plot and write with the best of them.” Mystery Scene Magazine

It’s one minute after the Big One. Marty Slack, a TV network executive, crawls out from under his Mercedes, parked outside what once was a downtown Los Angeles warehouse, the location for a new TV show. Downtown LA is in ruins. The sky is thick with black smoke. His cell phone is dead. The freeways are rubble. The airport is demolished. Buildings lay across streets like fallen trees. It will be days before help can arrive.

Marty has been expecting this day all his life. He’s prepared. In his car are a pair of sturdy walking shoes and a backpack of food, water, and supplies. He knows there is only one thing he can do … that he must do: get home to his wife Beth, go back to their gated community on the far edge of the San Fernando Valley.

All he has to do is walk. But he will quickly learn that it’s not that easy. His dangerous, unpredictable journey home will take him through the different worlds of what was once Los Angeles. Wildfires rage out of control. Flood waters burst through collapsed dams. Natural gas explosions consume neighborhoods. Sinkholes swallow entire buildings. After-shocks rip apart the ground. Looters rampage through the streets.

There’s no power. No running water. No order.

Marty Slack thinks he’s prepared. He’s wrong. Nothing can prepare him for this ordeal, a quest for his family and for his soul, a journey that will test the limits of his endurance and his humanity, a trek from the man he was to the man he can be … if he can survive The Walk.

It wasn’t like he imagined it at all. Of course, everything Martin Slack imagined seemed to come from television or movies, or at least big chunks of it, so he figured his own imagination really wasn’t to blame for things not being the way they were supposed to be.

There weren’t any of those ominous, early warning signs that everyone ignored, like big flocks of birds flying away or dogs barking for no reason, or the little rumbles that were shrugged off as a big truck passing by on the street.

Marty wasn’t getting married, retiring from the force, embarking on a maiden voyage, or christening some bold, new construction project, each a definite precursor of disaster, at least according to Irwin Allen, the acknowledged expert on the subject.

And at least one thing turned out like the movies—here he was, underneath his car, just like Charlton Heston in Earthquake. That’s where any similarity between Marty and Charlton ended.

He wasn’t clutching Ava Gardner, and he certainly wouldn’t sacrifice himself to save her over Genevieve Bujold. And after the shaking was over, Charlton wasn’t curled in a fetal position, covered in dust and sprinkles of broken glass, wondering if the itchy wetness he felt on his legs was blood, something from the car, or his own piss.

Marty didn’t want to move. He felt just like he did waking up in his soaked sleeping bag at Camp Cochise, afraid to stir, hoping everything would dry before the other campers, especially that bully Dwayne Edwards, woke up and discovered he was a bed-wetter. The sharpness of the fear and shame, thirty years later, surprised him almost as much as thinking about it now.

It was enough to embarrass him into opening his eyes and pushing away the bricks and broken glass that surrounded the car. He dragged himself from under his Mercedes, scraping his fingers on the shards of glass in his haste. But he didn’t care. He had to get out.

The first thing he noticed was the dust, the chalky mist of pulverized plaster, mortar, and brick. It was everywhere. In his eyes, in his nose, in his lungs. Coughing, he staggered to his feet, his balance totally shot. It didn’t help that asphalt was all cracked and bubbled, like something was trying to break out from underneath.

The derelict warehouse he’d been in just a few minutes before, making the obligatory network exec visit to the set of Go to Heller, was now just a pile of bricks, which slopped onto his car, flattening it like a $42,000 German beer can.

The warehouse was never retrofitted for earthquake safety. It had been abandoned and neglected for decades, which made it a great seedy location for cop shows.

But it wasn’t abandoned today.

There were fifty or sixty people in there. The cast, the crew, the director. Now they were under tons of rubble. And if Marty had schmoozed ten seconds longer, he would have been, too.

Marty stumbled over the debris, making his way around the edge of what had been the warehouse, and saw a handful of caterers, electricians, grips, and wardrobes swarming over the debris, quickly sorting through the bricks in a desperate search for survivors.

“Has anyone called for help?” he shouted, but didn’t wait for an answer. He was already yanking out his cell phone, flipping it open like Capt. Kirk’s communicator and dialing 911 as he approached them.

The tiny device bleated an electronic protest. No signal.

What was the point of having a damn cell phone if you couldn’t depend on it at times like this?

Marty snapped the phone shut, stuffed it into his pocket, and joined the others, picking up bricks and tossing them behind him as fast as he could.

This was really bad. A native Californian, Marty’s ass was a natural Richter scale, accurate within two-tenths of a point. He knew the Northridge Quake was a 6.5 before CalTech did. And his ass was telling him this was bigger. Much bigger. Beyond the range of his experience.

“My brother,” someone shrieked.

It was the guy beside Marty, one of the grips, the people who do the heavy lifting around the set. The guy was missing an ear, blood soaking his Panavision t-shirt from his shoulder down to his tool belt. But the guy was oblivious to it, he just kept repeating the same thing as he thrashed his way through the debris.

The guy said it over and over, becoming more frantic with each repetition. Marty focused on digging through the rubble directly in front of him. He didn’t know what else to do.

Where the hell were the firemen? The police? Why wasn’t he hearing any sirens?

“Over here!” one of the caterers yelled.

Everyone scrambled across the rubble toward the caterer, helping him heave the bricks aside, exposing first a bloody pant-leg, then a big, silver belt buckle.

That was all Marty needed to see. They’d found Irving Steinberg, the executive producer, a New York-born Jew who dressed like he was about to go on a cattle drive. Irving liked to refer to his ever-present Stetson as his “ten-gallon yarmulke.”

In truth, Irving wore the Stetson because he thought it was less embarrassing and would draw less attention than even the most expensive toupee. Just look at Burt Reynolds and William Shatner, Irving would say. Wouldn’t they look much better with hats?

Irving always made Marty smile. In fact, Marty was walking out with one of those Irving-produced smiles just before the rumbling started.

“Put this show on the fall schedule,” Irving said, “and I can finally afford my dream.”

They uncovered the rest of Irving.

If it wasn’t for the trademark clothes, he would have been unrecognizable.

Marty backed away, shaking his head, struggling not to lose his balance as he fled. Irving was dead. Just a few minutes ago Irving was talking and joking and dreaming and now he was dead.

How could that be?

That’s when someone jacked up the volume on the world. Suddenly Marty’s ears opened up and he was bombarded by a shrill chorus of horns and car alarms, punctuated by the muffled rumble and pop of explosions, volleys on a distant battlefield.

It was like the theatre lights coming on after a movie, when he would notice the walls, the aisles, and the moviegoers he had forgotten were there. Now the lights were coming up on Marty’s new world.

All the warehouses on the decaying, industrial block had either folded in on themselves in giant slabs or were reduced to rubble, all under a huge cloud of dust. The only structure still standing was a cardboard box mansion in the alley, its dirty-faced owner peeking out hesitantly at the destruction, then disappearing back inside, closing a flap behind him. His building was the only one on the block that seemed to be up to code.

Marty turned and saw the 6th Street bridge, the Art Deco giant slumped into the concrete banks of the LA River, pouring cars into the polluted dribble of water below. A big silver line of Metrolink rail cars had derailed, dangling over the vertical concrete embankment like decorative tinsel. Fire licked out of the windows, the flickering light shining off the dented, metal skin.

Marty turned again and saw the downtown LA skyline. Most of the glass towers still stood, like giant shattered mirrors, the harsh sun reflecting off their hideously cracked faces in jagged rays. They had swayed with the earth, as the engineers promised they would, shaking off their tinted glass skin. Only one high-rise couldn’t hold on, and now leaned against another, as if too tired to stand any longer, panting smoke and flame in enormous bursts.

He felt an immediate distance, as if seeing it on a TV screen instead of living it. These were special effects, cardboard miniatures and plastic models. For a moment, he almost believed if he squinted, he could make out the matte lines between the real image and the computer-generated one painted in around it.

All of a sudden the ground started to heave. At first Marty thought it was an aftershock; then he realized it was himself, his whole body shaking violently. He fell to his knees and started to gag, vomiting until he thought he’d start spitting out organs.

Finally, the gagging stopped and Marty just stayed there, his eyes closed, waiting for his body to stop shaking, puke in his throat, in his nose. He found the horrible smell and sick taste strangely reassuring. It was something he recognized.

Marty straightened up and found a Kleenex in his pocket. He blew his nose, balled up the tissue, and tossed it.

Now he knew why he didn’t hear sirens. Because no help was coming. Not for anyone. Not for a long time.

He’d left the warehouse set in a hurry, glancing at his watch as he rushed out, worried he’d be late for the staff meeting.

That was the last thing he did before it happened.

Now he looked at his watch again, a drop of blood landing on the cracked crystal just as he noted the time: 9:15 a.m. Tuesday.