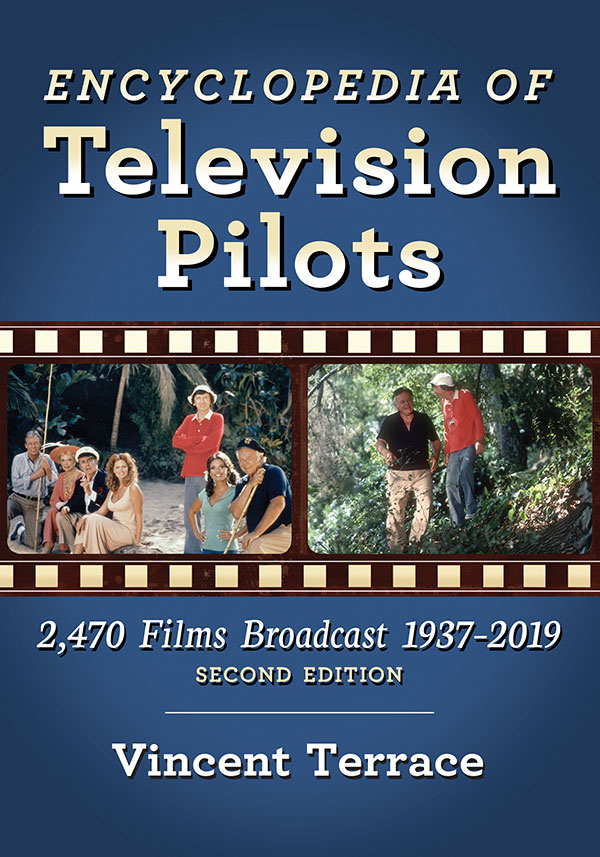 The Encyclopedia of Television Pilots, 1937-2019 by Vincent Terrace. This is the second edition of his encyclopedia, covering 2470 broadcast pilots, and it’s a big step up from the previous book. For the new edition, he’s added two useful appendices — one on Series Pilot Films (pilots movies that aired and led to series) and another on Series Spin-offs (TV series that begat other series). It’s a terrific book. And if you combine it with his recently-released Encyclopedia of Unaired Television Pilots, 1945-2018, it represents an astonishing achievement in television research and the definitive work on unsold pilots to date.Most of the problems I had with the previous edition of the Encyclopedia of Television Pilots have been solved with this new edition and with publication of his Unaired Pilots book…but some persist.

For example, Terrace still organizes pilots alphabetically rather than by the season/year they were considered by the networks for the fall schedules…so it’s missing the cultural, creative, and strategic context at play that’s crucial to understanding why a particular pilot was developed and produced by a network. Although an unsold pilot may have aired in 1977, that doesn’t mean that’s the year/season it is was developed and produced. Many pilots were aired years after they were made. He could have organized the book by season and also included an index that listed the pilots alphabetically, with their entry number. The alphabetical arrangement of the book makes the book far less useful than it could be for TV producers and network and studio development executives…a large audience outside of libraries and universities that could afford this book.Also the index doesn’t include the titles of TV series that hosted unsold pilots for proposed spin-offs (aka “nested pilots”)…so if you wanted to look up all the unsold pilots that aired as episodes of, say, Kraft Suspense Theatre, The Untouchables, Magnum PI, Bob Hope Chrysler Theater, Diagnosis Murder, The Rifleman, or Mr. Ed, you couldn’t. You’d have to slog through the book and find each one. And I wish each listing included the studio or production company that produced the pilots…which is invaluable information for TV historians, particularly those researching a particular studio or production company.

There are also unsold pilots that are missing, particularly among the nested pilots. For example, the final episode of George Segal’s 1988 series Murphy’s Law was a nested pilot for an unsold Joan Severance spin-off and in his second Appendix on Series spin-offs, he misses that Diagnosis Murder was a spin-off from Jake and the Fatman and that Dirty Sally was a spin-off of Gunsmoke. (Richard Irvin’s book The Forgotten Desi and Lucy TV Projects includes several nested pilots and spin-offs that Terrace missed in this book). But that’s a minor quibble. It’s inevitable that some pilots will fall through the cracks. It’s very, very hard to keep track of all the shows in development, particularly those that are snuck onto the air as episodes of existing series…or that are aired in only some markets in the dead of summer in the wee hours of the night. The networks have become incredibly secretive over the last twenty years about their pilots… their R&D…even forcing producers to sign NDAs, limiting circulation of scripts, and refusing to allow unsold pilots to be seen outside of their screening rooms. In the face of all that. he’s probably succeeded in finding and listing 98% of the scripted, network pilots that have ever been produced, which is remarkable.

However, a few of the missing pilots raise a troubling question. How many of the omissions are intentional?

For example, only one of the half-a-dozen aired, episodic drama pilots for major networks that I wrote and produced are in the book, which I have to assume is a conscious decision by Terrace, perhaps based on animosity he feels towards me and my book Unsold Television Pilots 1955-1989 (I assume that Mystery 101, the one pilot of mine that slipped into his book, in his appendix on Series Pilot films, happened because he didn’t realize that I co-wrote the pilot and co-created the series). As a result, a researcher looking for all of Fred Dryer’s unsold pilots wouldn’t know that he and Neal McDonough starred in The Chief, an unsold pilot that aired as a two-hour episode Diagnosis Murder. Or someone researching an article, paper or book on nested pilots wouldn’t know that Sal Viscuso and Kate Burton starred in Play It Again, Sammy, an unsold spin-off pilot that aired as an episode of Spenser for Hire. I suspect these are intentional ommissions, since Terrace lists some, but not all, of the unsold spin-off pilots from Diagnosis Murder and Spenser for Hire. It makes me wonder how many other pilots or credits he didn’t include for purely personal reasons…a dislike of a writer, actor or producer. If that is the case, it’s petty and undermines his work.