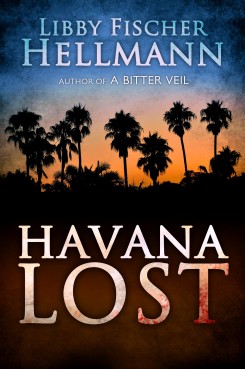 The Chicago Tribune hailed my friend Libby Fischer Hellmann’s new novel HAVANA LOST as her “most ambitious book, a sprawling novel that spans more than six decades and a number of countries and comes peppered with passions, love affairs, kidnappings, conspiracies, CIA and Outfit thugs, and, naturally, a pile of dead bodies.” Sounds great, doesn’t it? So I asked Libby to tell me how this book came about… 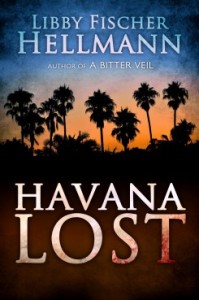 I was talking to my sister on the phone after I finished A BITTER VEIL. I was already about 60 pages into my next Georgia Davis thriller, but something was preventing me from investing in it. I considered writing a World War Two thriller—I’m continually drawn to periods of extreme conflict in which some people are heroes, others cowards, and you never knew whom to trust. Unfortunately, I realized there was probably nothing I could write about World War Two that hasn’t been done better by someone else.

Our phone conversation turned to other time periods and settings of extreme conflict, and my sister brought up Cuba. As soon as she mentioned it, I started to get that itch—the kind of itch that can only be scratched by diving into a subject. We both remembered how my parents flew down to gamble in Havana. This was when Batista was still in power. I must have only been about 6 or 7, but I remember being jealous that they were going to a foreign country and culture. I wanted to go. Of course, they didn’t take me.

A few years later Fidel took over and Cuba was suddenly off limits to Americans. Soon afterwards it turned Communist, and Communism was our enemy! Because of that, Cuba seemed even more mysterious and exotic, and I wanted to know more about it. A year later, of course, came the Bay of Pigs, followed fifteen months later by the Cuban Missile Crisis, both of which made Cuba even more impenetrable and threatening. So close and yet so far.

Finally, and I’m not ashamed to admit it, I recalled one of the Godfather films where Al Pacino (Michael Corleone) and Lee Strasberg (Hyman Roth aka Meyer Lansky) are on a rooftop supposedly in Havana discussing how they’re going to own the island. Shortly after that, Michael sees a rebel willing to die in order to overthrow Batista . Michael changes his mind about doing business with Roth.

That clinched it. I realized I had most of the elements for a terrific thriller: revolution, crime, conflict, an exotic setting. And while I knew it would be a stand-alone story, rather than a series, there is a thematic link between HAVANA LOST, and the two previous stand-alone thrillers I’d written: A BITTER VEIL and SET THE NIGHT ON FIRE. That theme is revolution and what it does to an individual, a family, a community, a country, a culture. In fact, I consider HAVANA LOST the noir leg of my “revolutionary trilogy.”

There was only one other element I needed.  I enjoy—actually it’s more than that… it’s probably an obsession at this point—writing about women and the choices they make. I needed a female character I could insert into the middle of the volatile situation. It would be fascinating to see what she did and how she coped. How would she survive? What kind of a woman would she become? I found that woman in Frankie Pacelli, the daughter of a Mafia boss who owns a Havana resort. She’s eighteen when we meet her but in her seventies by the end of the book.

The rest was, as they say, is history.

Btw, I finally did make it to Cuba in 2012 with my daughter, and it was just as fascinating as I thought it would be. I want to go back. In the meantime, I hope you’ll take a look at HAVANA LOST.

Chicagoan Libby Fischer Hellmann is the award-winning author of ten compulsively readable thrillers. They include the Ellie Foreman series, which Libby describes as a cross between “Desperate Housewives” and “24,” the hard-boiled Georgia Davis PI series, and two standalones, SET THE NIGHT ON FIRE, and A BITTER VEIL. Her tenth and newest release, also a stand-alone, is HAVANA LOST, a historical thriller set largely in Cuba. She also has written nearly twenty short stories and novellas. A transplant from Washington DC, she says they’ll take her out of Chicago feet first.