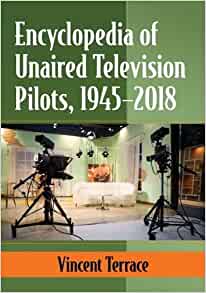 I couldn’t help myself and bought Vincent Terrace’s outrageously over-priced ENCYCLOPEDIA OF UNAIRED PILOTS, 1945-2018 by Vincent Terrace…supposedly a complete list of unsold pilots that were shot and never broadcast. The book also includes appendices of series that sold, but were substantially recast after their pilots. How could I resist this?? I’m wowed. It’s a very impressive book, filled with useful information. I doubt anybody but me, who is steeped in this stuff, would notice the shows that he missed. For example, he missed the 1993 Fox pilot DR. DOOLITTLE aka WILDE LIFE (Brian Wimmer played the role), the 1986 CBS pilot FLAG (starring Darren McGavin) and the 2018 CBS reboot of CAGNEY & LACEY (starring Sarah Drew & Michelle Hurd), to name a few. In his section on series that were recast after the pilots, he doesn’t include ABC’s 2008 version of LIFE ON MARS (Jason O’Mara was the only cast member retained…Colm Meaney was among the actors booted), the 1987 CBS series SPIES (George Hamilton replaced Tony Curtis as the lead), the CBS series MARTIAL LAW (Dale Midkiff was Sammo Hung’s original partner), the 1987 Fox series 21 JUMP STREET (Jeff Yagher was the original star, replaced by Johnny Depp), THE BOB NEWHART SHOW (Bill Daily wasn’t in it and Peter Bonerz’s Jerry wasn’t a dentist, he was Bob’s partner, another shrink!), PERFECT STRANGERS (Louie Anderson was replaced by Mark Linn Baker), THE SIX MILLION DOLLAR MAN (Darren McGavin was Oscar Goldman in the pilot), etc. I’m sure there are many more omissions I could mention if I put my mind to it… or compared his book to my own (UNSOLD TELEVISION PILOTS 1955-1989). To be fair to Terrace, it’s very, very hard to find information on unaired pilots and only a handful of people like me, longtime TV writer/producers, and seasoned studio and network development executives, would notice what he missed (I only know about SPIES, for example, because I was up to be on staff and a screener video cassette was given to me). I also wish there was more context to some of the listings…details on the development history, what the projected series would have been and why it wasn’t picked up. But again that’s just me…and I can’t blame him for not having the details, it requires a lot of interviews, and a real passion for the subject. Let me stress, that these are nit-picks. This is a fantastic book, an incredible work of TV research…and I’m saying that after only sitting with it for a couple of hours. If this book wasn’t so ridiculously and unjustifiably expensive, I would strongly recommend that anyone interested in TV history snap it up. It’s an essential reference work for *any* TV reference book library, personal or institutional. 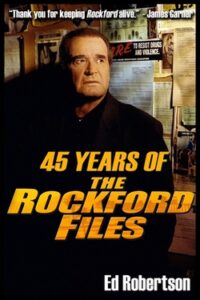 Ed Robertson just released 45 YEARS OF THE ROCKFORD FILES, an updated edition of his previous books on the series. It’s terrific! I’ve loved every edition of this book (and have them all). It just keeps getting better and better. I have to admit that I feel uncomfortable reviewing this edition because I keep coming across quotes from me in the book. So let me reshare what I said about the previous, 2006 edition, because the praise still applies:

If you’re as into TV… and TV Private Eyes… as I am, you’ve got to buy yourself Ed Robertson’s “Thirty Years of THE ROCKFORD FILES.” The book covers every aspect of the classic series, from the making of the pilot through the production of the eight reunion movies (as well as unproduced scripts and the tie-in books by Stuart Kaminsky among other things). Robertson interviews all the key players in front of, and behind, the camera, including James Garner, Steve Cannell, Roy Huggins, and Charles Floyd Johnson, and provides detailed episode synopses. Like improved software, it’s well-worth “upgrading” to this new edition. 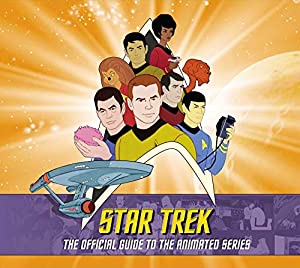 Sometimes it seems like there’s an entire segment of the publishing industry devoted only to producing books that examine every aspect of Star Trek, and it’s many sequels and spin-offs, to an almost molecular level. Some of those books are quite good (like Marc Cushman’s massive reference works). Some are just coffee-table books full of pretty pictures targeted like a tractor beam to lift every last cent from a Trekker’s wallet. STAR TREK: THE OFFICIAL GUIDE TO THE ANIMATED SERIES by Aaron Harvey & Rich Schepis, falls somewhere in-between. It is a pretty book, basically a slick, hardcover episode guide with nice artwork and production sketches.  There some interesting information here, but there’s also a lot of repetition, many of the same facts are repeated over and over and over… either out of laziness, or for padding, or an assumption that nobody will read the book cover-to-cover, so some information needed to be repeated.  Take out the artwork and the repetition and it would be a thin book. As a TV reference work, it can’t compare to Marc Cushman’s THESE ARE THE VOYAGES: GENE RODDENBERRY & STAR TREK IN THE 1970s (1970-75), a 750 page behemoth that goes into extensive detail (perhaps too much) on the production of the animated series as well as Roddenberry’s unsold pilots (Genesis II, Planet Earth, Spectre, etc) and other projects produced during that period.

3 thoughts on “A Ton of TV Reference Books Reviewed”