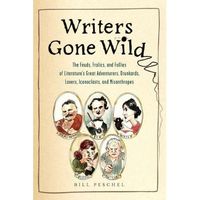 I'm in Walla Walla, Washington for my mother's funeral…but while I am away, my friend Bill Peschel has kindly stepped in to keep my blog going with an excerpt from his terrific and very entertaining new book Writers Gone Wild. Here's a story about Raymond Chandler, John Houseman, three double martinis, a doctor,  a limo and a screenplay…

Some writers go to great lengths to finish a work. To finish a screenplay, Raymond Chandler got tanked.

At fifty-seven, the writer’s best work was behind him when he was hired by Paramount for a rush job. The studio’s leading actor, Alan Ladd, had been drafted into the army, and the executives wanted to keep his profile with the public alive by releasing a movie while he was away. A script wasn’t ready, but Chandler offered to write a new one based on his half-finished novel, “The Blue Dahlia.”

But with the date for Ladd’s induction set, shooting began with only part of the script written. Chandler workedfast, but as the filming caught up, the executives worried whether he could finish on time. With only two weeks left, a Paramount executive called Chandler and offered him a $5,000 bonus if he succeeded.

The next day, a shaken Chandler met with the producer, John Houseman. The offer, he said, implied they had no faith in him. It was an insult to his honor to take a bonus for a job he had agreed to do. Now, he didn’t think he could even finish the script except under one condition: He would have to get drunk.He always wrote faster that way.

Chandler had a list of his needs: two limousines with drivers available around the clock to fetch a doctor, deliver script pages to the studio, and drive the maid to market; secretaries to take dictation; and a direct phone line to Houseman.

Houseman considered the risks. Chandler hadbeen a heavy drinker most of his life before drying out. A relapse could kill him. Still, the movie had to be made, and he didn’t have any alternative. He agreed, and at a celebratory lunch, Chandler loaded up with three double martinis and three double stingers.

For eight days, Chandler drank, passed out, wrote, drank, and passed out again. Twice a day, the doctor shot him up with vitamins and fed him glucose intravenously. Chandler finished the job with days to spare but spent the next month recuperating in bed. The script’s last line was “Did somebody say something about a drink of bourbon?”