Here’s a golden oldie from a few years back…

I got an email today from a guy who says he’s been writing scripts and entering competitions for the last five years, ever since he got his MFA from York Univeristy in Toronto.  He can’t get seem to get any “reputable agents” to read his work.

I’m sure you can see where this is going. So here is my very presumptuous request: I’d like to send you one of my scripts. Read it when you have a moment — even if its a year from now. If you like it good, you can refer me to your agent. If you don’t, no harm, no foul.

I assure you that it will NOT be a waste of your time.

I get this request, oh, about 80 times a month. It makes no sense to me.  So, to all eighty of you getting ready to write me the same email next month, here’s why it’s a dumb idea to ask me to read your script and refer it to my agent.

1) I’m a writer, I’m trying to market and sell my own work, not yours.

2)  It’s not my job to screen potential clients for my agent.  Finding clients is his job. I like to think he works for me rather than the other way around.  Besides, I want him spending his time on the phone getting me work, not looking for new clients who will divert his full attention from me, me, me.  (That’s not to say I haven’t recommended clients to my agent… I have, many times. He’s even signed a few. But they were close friends of mine or people whom I’ve worked with and admire).

3)  I’m not a studio or network development executive. I don’t care if you’ve written a good script.  I’m not hiring writers. If I was, I’d hire myself. 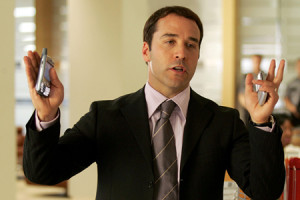 4)  When I am looking for writers to hire on staff or invite in to pitch for episodic TV assignments, I only read writing samples that come through agents. Why?  Well, we said it best in our book, “Successful Television Writing” —

You probably think that’s because we’re a close-knit group of elitist jerks who want to horde all the money and opportunities for ourselves, and agents are just one more gigantic obstacle
we’ve come up with to keep you out.

You’re right. Sort of. Agents are the first line of defense for us. They read through all the crap to find the very best people, the writers they can make a living on. And the only way an agent is going to make a living

The great thing about this system, for us, is that the agent has a real motivation to find the best writers out there, saving us the trouble. Because let’s face it, elitist jerks like us don’t want work any harder than we have to.

But agents do more than save us extra work. They also protect us. That doesn’t mean they’ll take a bullet for us or taste our food to make sure it isn’t poisoned. But they’ll make pretty sure we don’t get sued.

We’ll give you an example of what we’re talking about. Let’s say you sent us a script a month ago in which the hero of our show loses his memory. Then you turn on the TV this week, and
what do you see on our show? A story about the hero losing his memory. You’re going to think we stole it and sue our asses.There are a lot of similar themes in stories being developed all the time, and a television professional, will understand that. A professional will also understand that the development process is much longer than a month, and that our script was probably written long before yours showed up in the mail. And a professional will figure that we’ve probably been pitched fifty amnesia stories, because it’s a terrible cliche, right up there with evil doubles and the return of long-lost siblings, that’s eventually done on every show.

But without an agent representing you, and vouching for you, we have no assurance that you are, indeed, a professional.

Which leads me to my next point.

So no, don’t send me your script. Don’t try to send it to any other professional writer, either.  It’s a stupid idea.

Okay, so that’s what I told him. And here’s his response:

Your use of the word “professional” here implies that you regard me as an amateur.
Your used of the word “stupid” needs no comment. Well, it’s true that I’m not a professional
in the sense that I never got paid for my screenwriting up to now. However,
as I indicated in my (very polite) message to you, I have a long career
behind me as a journalist. I was hoping for a more mature response from you
on that basis alone — at least a response that does not belabor the obvious.

You’d think he would have put his journalism skills to use and a) read
my blog before emailing me and discovered  the many, many posts where I discuss the
pointlessness of sending your scripts and series ideas to me and b) he would have
researched the industry a bit and realized sending his script to a screenwriter was not the best way to find an agent or break into the business. He goes on to say:

Would you have been so patronizing if I had a name other than
Mohamed? Or if I was not a Canadian? Perhaps not. At any rate, your comments
are duly noted and I wish you continuing success with Diagnosis Murder
and whatever else it is that you do.

Ah yes, the last gasp of the desperate… the racism, sexism,  ageism, or xenophobia card. To be honest, I didn’t even notice his name or where he came from. I didn’t bother to read that part of his original email since I had absolutely no intention of contacting him about his screenplays. But you’ll notice that rather than learn from his mistake, and accept that his proposal  might have been wrong-headed, he has to flail around for some other, hidden reason that I won’t read his scripts. With an attitude like that, it’s not surprising to me he’s been entering his scripts into competitions for five years instead of selling them.