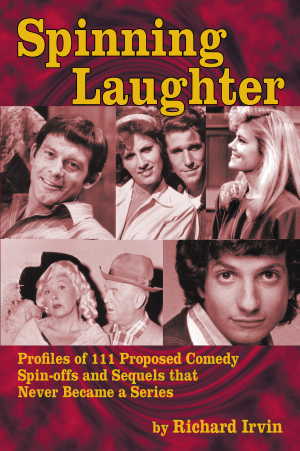 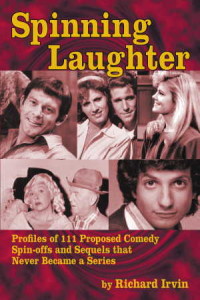 I love books about television shows, and occasionally movies, and after delivering the manuscript of my latest novel I binged on them. Here are some of the ones that stood out, for better or worse.

I fell in love with this book the instant I read the title. It was as if this book was written specifically for me…a guy who once wrote a book on every TV series idea rejected by the networks since the dawn of the medium. I mean, who else would buy a book about 111 sitcom spin-off pilots that went nowhere? Well, you should, my friend. Because if you love television, and if you’re interested in how this crazy business works, this is a must-read. This is virtually a sequel to Irvin’s marvelous Forgotten Laughs, his book about extraordinarily short-lived sitcoms and written with the same breezy style and indepth research, which involves more than just sorting through old TV Guides (as so many writers of TV reference books do). Irvin has gone out and, in many cases, interviewed the key writers, producers and actors involved in the aborted spin-offs. Where else will you learn about the aborted spinoffs from such short-lived failures as It Had to Be You, That’s My Mama, and All American Girl? Or learn about the five, count’em FIVE, intended spin-offs from The Facts of Life (itself a spinoff from Diff’rent Strokes?) You gotta get this book. And, if you are a true student of television, also buy Forgotten Laughs and Irvin’s George Burns TV Productions. 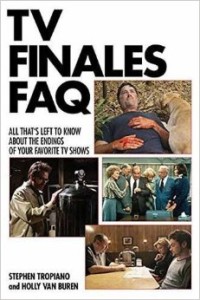 This an informative and useful book… despite some clunky writing, poor editing, and puzzling omissions. The writers do a good job giving detailed information on the creative arc of each series leading up to their finales, which are explored in-depth. The critical and “fan” response to the finales is also explored in detail. Series finales aren’t limited to dramas or sitcoms. They cover many genres, including talk shows and soaps. Most of the content appears to be based on personal viewing and quotes lifted from previously published material…other reference books are frequently quoted and cited. Few interviews appears to have been done specifically for this book, which is a weakness and gives the book a “reheated leftovers” feel, as if its simply an accumulation of data already covered by others.. Most of the finales you expect to be discussed in a book about TV finales are discussed (Newhart, Mary Tyler Moore, St. Elsewhere, Sopranos, The Fugitive, etc.  etc)… but, strangely, they also include final episodes that were never intended by the producers as finales (like “The Sharecroppers” episode of Gunsmoke) and finales for shortlived shows like I Married Dora  and Ugly Betty, and yet totally omit the blockbuster final episodes of popular shows like Star Trek: The Next Generation, Law & Order, Star Trek: Deep Space Nine, Jag, Who’s the Boss  and Star Trek Voyager. It’s not clear what the authors’ criteria for inclusion or exclusion was in their book.

The biggest problem with the book, however, is the clunky writing and terrible editing. The listing for Magnum PI is a perfect example of the editorial problems that plague the book. On page 59, they mention that the original pilot featured a hero who had gadgets, “including a hand glider that doubles as a machine gun.” Hand glider?? That’s a typo, and could be forgiven, if there weren’t so many other editorial problems with the book.

On the same page as that typo, there’s this inane sentence: “Selleck liked Bellisario’s writing as he had read his script for a proposed series entitled Gypsy Warriors (1978) in which Selleck and James Whitmore Jr. played a pair of World War II espionage agents posing as gypsies in France and Germany.” Well duh, OF COURSE Selleck read the script. It would be difficult to star in the pilot film WITHOUT reading the script, wouldn’t it? Lame sentence. An editor would have caught that…assuming the book was edited.

There’s more. On the same page, the authors write about how Bellisario purportedly rewrote Glen A. Larson’s Magnum pilot by using a busted pilot of his own as a starting point: “A few years back, Bellisario had written a script entitled H.H. Flynn about three Vietnam vets: Rick, a club owner who idolizes Humphrey Bogart; TC, a helicopter pilot; and Magnum, a private investigator who lives in a guest house on a Bel Air estate owned by the ‘florist to the stars.'” Really? The hero’s name was Magnum in a pilot called H.H Flynn? C’mon, guys.

The book is rife with bizarre sentences like those and its a shame. Even so, I would still recommend this book for your TV reference library. 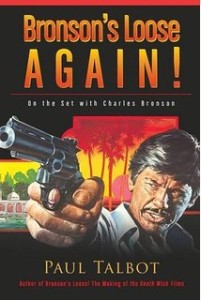 I didn’t think Paul Talbot could top Bronson’s Loose … but he’s managed to do it in Bronson’s Loose Again, his terrific over view of Charles Bronson’s films outside of the Death Wish franchise. It’s full of great interviews and insights into the development, production, and ultimate success (or failure) of his films and TV movies. You don’t have to be a Bronson fan to enjoy this book…it’s a must-read for anyone interested in the business behind how movies get made…and why they don’t. For instance, there’s a fascinating anecdote in the chapter on Love & Bullets about the unfilmed Bronson project Power…based on a rejected script in the Dirty Harry franchise. The movie was later made as Firepower starring James Coburn. And here lies the seed of what could be Paul’s next great book…the inside story on all the films made from rejected Dirty Harry scripts (like Chuck Norris’ Code of Silence and Fred Williamson’s The Big Score).

The World of Shaft by Steve Aldous

A wonderful, fascinating, well-researched, and extremely detailed look into every permutation of Shaft… from the books, to the feature films, and on through the TV movies. It’s everything a Shaft fan could want, filled with terrific details on the writing and development of the books and films. An excellent resource for anyone interested in Shaft or simply how a franchise is handled — or, perhaps, mishandled — across various mediums. Strongly recommended!!

My Life as a Situation Comedy by Bill Persky

I so, so, so wanted to love this book. I have been a big fan of Persky’s work for decades. I was hoping for a memoir that offered a behind-the-scenes look at the writing and production of his shows. There’s some of that in this book… but for the most part it’s a meandering, rambling, unfocused, and ultimately deeply disappointing, mess. There’s a lot of stuff about Persky’s personal life and not nearly enough about his professional life. That said, even as a personal memoir, it’s a meandering, rambling, unfocused mess. So it doesn’t really work on any level. A real missed opportunuty.