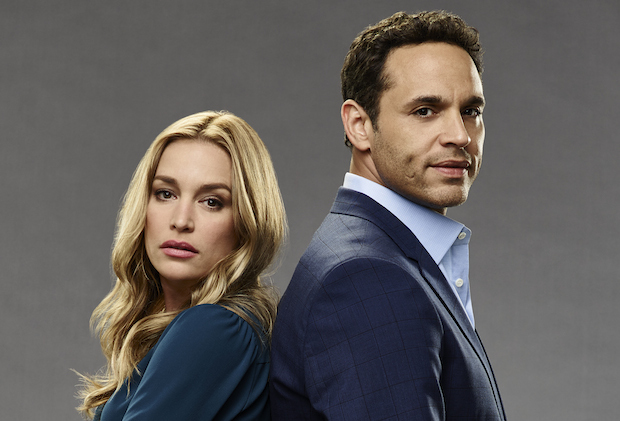 I missed the pilot of NOTORIOUS but I watched episode two… or I should say, I endured 3/4s of the episode before I decided to stop torturing myself.  It’s a show about a TV news show producer (Piper Perabo) and a celebrity lawyer (Daniel Sunjata), and how their two worlds, media and the law, are entwined. The series wants so desperately to be shocking, racy and daring… but it feels like a rehash of the worst elements of SCANDAL, DYNASTY and LA LAW all mixed together in a blender with a book of cliches. It’s all beautiful, cardboard characters in gorgeous clothes in brightly-lit sets being oh-so-naughty…and yet it feels so tame, so forced, so fake. A behind-the-scenes moment with the female newscaster, playing strip poker with a camera man, is just one of the cringe-inducingly-fake situations that make this show so painful in its attempts to be scandalous.  NOTORIOUS is the television equivalent of the fake wood trim that’s supposed to make the interior of a Chevy Impala feel luxurious. The only thing notorious and NOTORIOUS is that it got on the air at all.

After a week or so of slogging through dreck,  I have finally seen one new fall show that’s worth watching. Not surprisingly, it’s on HBO and not one of the broadcast networks. WESTWORLD takes a familiar premise — an amusement park full of robots where nothing can go wrong — and gives it a twist. In this telling, it’s the robots who are the  heroes… and the guests who are the bad guys. Imagine a version of JURASSIC PARK where everybody is rooting for the dinosaurs and that’s the conceit of WESTWORLD (both WESTWORLD and JURASSIC PARK were creations of Michael Crichton). But it’s clear the writers are going for something deeper and richer than simply shifting your rooting interest…and I’m eager to discover what it is. And that they are doing it with WESTWORLD, the 1970s movies that essentially started the “robot amusement park goes wrong” genre, makes it even more subversive.

My only problem with the show is that, at least in the pilot, they’ve tipped those scales too far the other way. All the human characters are unlikeable. They aren’t nuanced at all. The humans are bad, bad, bad…while the robots are tragic, imprisoned figures being horribly, and repeatedly abused in just about every way.

The production values, starting with the stunning main title sequence, are top-notch, so much so that you can almost forget, but not quite, that you’re seeing the same western sets that have been used in dozens of other TV shows and movies.

The cast is exceptional, too, though it’s a shame to see Sidse Babett Knudsen, the wonderful star of BORGEN (one of my favorite series) playing such a one-dimensional baddie. It’s a waste of her considerable talent but a joy to see her again nonetheless. I hope we’ll see her “human” character become less robotic…as the “robots” become more human.