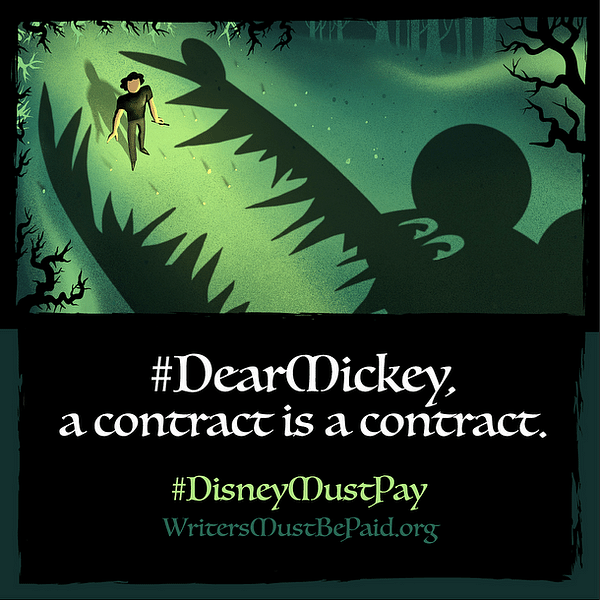 I am a member of the #DisneyMustPay Joint Task Force, a group of various writers’ organizations (SFWA, MWA, ITW, etc), that is demanding that  authors, comic book & graphic novel creators get paid the royalties they’ve earned for their work from Disney & its companies. Here’s the full press release:

LOS ANGELES (August 12, 2021) – The #DisneyMustPay Joint Task Force is expanding its focus and reaching out to all comic book and graphic novel creators who may be missing royalty statements and payments from Disney and its companies.

“Writers, artists, illustrators, letterers, and other artists are valued members of the creative teams that produce art and literature that is enjoyed by millions,” said Mary Robinette Kowal, Task Force Chair. “We are inviting these talented artists to share their stories and we will fight for them to receive the money that is owed to them.”

All potentially affected writers and artists should contact the Task Force to share their stories. Creators who are missing royalties or royalty statements may fill out this form hosted by SFWA. Anonymity is guaranteed.

Lee Goldberg, Task Force member and founder of the International Association of Media Tie-In Writers (IAMTW), adds his thoughts about the need for the #DisneyMustPay Task Force to expand its reach to all creators: “Novelists and illustrators provide a rich, all-encompassing story-telling experience, their words creating fully flesh-out characters and detailed images, if not entire worlds and universes, in the readers’ minds. The authors and artists honored their obligation to write and create their books. Now Disney should have the decency and integrity to honor their obligation to pay them. It’s that simple.”

Sandra Wong, National President of Sisters in Crime, states, “Sisters in Crime believes that writers and creators should be paid what they’re legally owed for their work, no matter the media or genre. We joined the Task Force to help spread the word to potentially affected authors, since Disney has placed the onus to be paid on writers and creators, and to lend our voice to an issue which has potential consequences for all creators.”

The Task Force’s goals are to ensure that all writers and creators who are owed royalties and/or statements for their media-tie in work are identified and that Disney and other companies honor their contractual obligations to those writers and creators after acquiring the companies that originally hired them.

Fans, fellow writers, and the creative community need to continue to post on social media showing their support so the #DisneyMustPay Joint Task Force can help writers. Thanks to their support, the message is reaching Disney and related organizations, to alert them to the work they need to do to honor their contractual obligations.

Progress has been made, most notably ensuring that three well-known media tie-in authors have been paid and attaining the cooperation of BOOM! Studios in identifying affected authors. However, more than a dozen additional authors are still in negotiations with Disney. Many of them, especially ones with lesser-known names, find communications with Disney repeatedly stalled until pressure is again applied by the Task Force and its supporters.

Additional updates and information are available at www.writersmustbepaid.org.

2 thoughts on “Disney Must Pay”