Somewhere out there, in the weird, quivering underbelly of the American dream, "Mannix" still lives.

Somewhere, there’s a place where a sportcoat-clad private eye can whip
around L.A. in a convertible, get beaten down by goons, shake it off
with a scotch on the rocks, then solve the case of the week with an
assist from his leggy secretary.

Somewhere out there, but not on DVD.

"Mannix," one of the longest-running, most violent (for its time), most
popular television detective shows in the medium’s history, has been
left out of the DVD trade. It’s fading into the forgotten realm of old
television shows nobody remembers.

I do. What the reporter didn’t mention was that two decades after the show was canceled, Bill Rabkin and I brought MANNIX back in highest rated DIAGNOSIS MURDER episode ever. The LA Times was one of the many newspapers and magazines that wrote about it back in 1997: 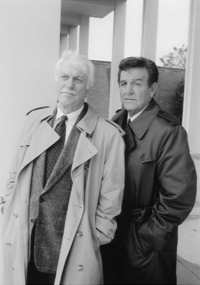 Mike Connors acknowledges that it’s been "kind of strange" to step back into
private investigator Joe Mannix’s well-worn shoes after 22 years for Thursday’s
episode of CBS’ "Diagnosis Murder."

"I’m really enjoying it," says the very fit 71-year-old actor. "Once they
start calling you Mannix and Joe, of course, it becomes a little easier."

Connors played the strong and suave shamus on the CBS action series "Mannix"
from 1967 to 1975, receiving four Emmy nominations.

This unique episode of "Diagnosis Murder" cleverly teams Mannix with his old
friend Dr. Mark Sloan (Dick Van Dyke) to solve a murder case that the detective
was unable to crack on his own series 24 years ago.

Scenes from the 1973 "Mannix" episode "Little Girl Lost" are used in
flashback sequences. Pernell Roberts, Beverly Garland and Julie Adams, who were
guest stars on the original episode, also appear.

"It’s such a good idea," the jovial Van Dyke says between takes on the
"Diagnosis Murder" hospital set in Van Nuys. "We weave the old show in so well
with the flashbacks."

The program marks the first time these two TV icons have worked together. "I
have known Mike for a long time," Van Dyke says. "We are really having a good
time."

Watching the filming with great delight are supervising producers Lee
Goldberg and William Rabkin, who came up with the idea of weaving the two series
together over lunch one day.

"We talked about one of our favorite shows, which was ‘Mannix,’ and we
couldn’t believe no one had brought back the show," says Goldberg. "When we were
kids we used to pretend we were Mannix. He drove the coolest car. He never got
his hair mussed. I wanted to be as self-assured and as confident as he was."

After coming up with the idea of combining an old "Mannix" show with
"Diagnosis Murder," Goldberg and Rabkin, who describe themselves as "TV geeks,"
began their search for the perfect "Mannix" episode.

"I had a book called ‘Television Detective Shows of the 1970s,’ which lists
every episode of every single detective show of the 1970s," Goldberg says. "So
we started looking through eight seasons of ‘Mannix’ and making a list of
episodes where the guest stars were alive, affordable and the story sounded
interesting. We must have pulled 30 of them and watched them."

"Little Girl Lost," Goldberg says, "had enough emotional resonance that it
would carry over 20 years. What is great about this episode is that Mannix
promised this little girl he would find her father’s killer. In the episode, he
actually discovers this whole mob plot, but he never actually nails the killer."

Goldberg then had to get up enough nerve to call his idol. "We couldn’t write
the episode until we got him on board. So essentially I spent an hour on the
phone assuring him this wouldn’t be a ‘Naked Gun’ spoof. We wouldn’t be making
fun of him and this would be a genuine continuation and it would be a real meaty
part."

Though his hair is still perfect, time has caught up with Mannix after too
many years of hard living. While in the emergency room, Dr. Sloan discovers
Mannix has a potentially deadly heart condition. Being the ultimate tough guy,
the private eye refuses to listen to his old friend’s warnings.

"We knew we couldn’t have him be the man he was 20 years ago," Goldberg says.
"But we also had to be true to that man and we got a kick pairing him up with
Dr. Sloan, who is soft-spoken and tries to get answers out of people being
roundabout and clever, and Mannix is in your face."

Beverly Garland, who is reprising her role as a tough cookie named Stella,
quips that doing this show was like "coming back from the grave!"

"It was the best," says Garland, who first worked with Connors in the
low-budget 1955 Roger Corman flick "Swamp Women." "It’s going to be fun to see
all of us the way we were. It’s going to be an interesting show. It works."

3 thoughts on “Mannix is the Man”