Last night, my local chapter of the Mystery Writers of America had a summer party at author Bill Fitzhugh’s house in the valley. We all sat outdoors in the warm night air under big, shady trees and strings of Christmas lights. Bill made three different kinds of gumbo and an array of tasty shrimp and crab appetizers, proving that if things ever cool down for him in publishing and radio, he can always open a restaurant.

I caught up with lots of folks, including authors Denise Hamilton, James Lincoln Warren, Diane Pugh, Gary Phillips, Theresa Schwegel, and Christa Faust, who told me all about her novelization of SNAKES ON A PLANE. 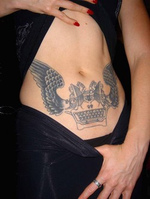 Christa once wrote a 95,000 word FRIDAY THE 13th original tie-in novel in six weeks, and without ending up in the I.C.U., which I find pretty darn amazing. She has a tattoo of a vintage typewriter on her belly. I didn’t see it there, but she told us about it, and I found a picture of it later on her website.  Christa told me some horror stories about  the brutal deadlines and low pay in the tie-in biz…then again, she loves telling horror stories of all kinds. She wore a dress covered with skulls that fascinated the kids at the party.

The lovely and charming Theresa Schwegel insists that winning the Edgar hasn’t changed her, but I don’t recall her insisting that people kiss her hand and refer to her as "your highness" before the award. I didn’t mind. I don’t think she has a typewriter on her belly.

Bill gave everyone generous "To Go" bags full of gumbo and rice on the way out, so my lunch today isn’t going to include another trip to The Habit where, oddly enough, I bump into Bill every so often.

It was  a great party. I hope Bill does it again next year.