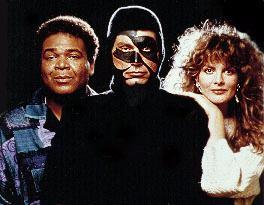 Cheesecake came to mind today because I just watched the first regular episode of Bill Bixby’s THE MAGICIAN, from the newly released DVD boxed set, that had that same “Cheesecake ” expository character — though it was a white guy in a wheelchair and aired several years before SABLE premiered. Just goes to show how long that dreadful, lazy writer cliche has existed.