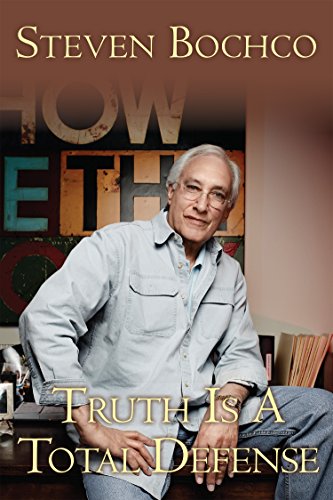 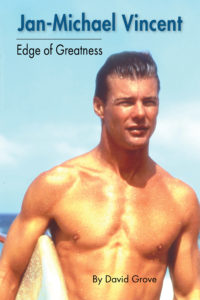 I recently read the stories of two TV celebrities.. one a star in front of the camera (Jan-Michael Vincent), one a star behind it (Steven Bochco). One is a biography, the other a memoir…and both were fascinating.

Grove missed his calling. He should have been a novelist. Thanks to Grove’s vivid prose and keen eye for emotional detail, Edge of Greatness reads much more like a tragic novel than the standard biography of a mildly talented actor’s rapid rise and horrific downfall. This is the all-too-familiar story of a self-destructive actor undone by all the temptations of Hollywood — sex, drugs, alcohol — and his own hubris.

The book tracks Vincent from his humble beginnings in the central California farming community of Hanford, through his years of stardom, and up to his current squalor, which is physical, mental and financial. As Grove puts it:

“A black Mustang convertible and a patch of roses out front offer the only clues to his past life, when his aquamarine eyes, chiseled features, and sun-streaked hair sang of creamy sand and sweet sex. He has long ceased being beautiful or strong.”

Vincent today is confined to a wheelchair. He has lost a leg, the result of peripheral artery disease, and he struggles with diabetes, epilepsy, and the ravages of “countless episodes of alcoholic poisoning and toxic shock.” Grove goes on to say that Vincent “barely weights 100 pounds, his teeth dangle in his jaw, brittle and emaciated”  and that the condition of his liver “has moved far beyond the simple characterization of cirrhosis. It’s a celebration of rot.”

And all of those quotes are just from page one, effectively setting the stage for the tragic story to come. Sure, he gives away the ending, but it puts the actor’s entire rise and fall into horrific perspective that haunts the book. What makes this tragedy compelling reading, as opposed to the literary equivalent of watching a train wreck, is Grove’s writing and reporting skills. Perhaps that’s due to this startling admission from the author, at the very end of the book, when he asks himself if he likes Vincent:

I don’t like myself, which is what we have in common and why I was drawn to him.

And he goes on to conclude:

It’s obvious now that he was not born; he was invented. I thought there would be more, but this is it. He got what he deserved.

Wow. It’s hard to turn your eyes away. 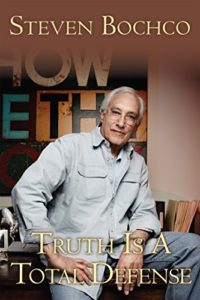 Truth is a Total Defense by Steven Bochco

Bochco is one of the most talented, influential, and deservedly celebrated writer-producers in the history of television. It’s not hyperbole to say he has reshaped the medium, not just through the ground-breaking dramas that he wrote and co-created (Hill Street Blues, L.A. Law, NYPD Blue), but also by virtue of the many amazing writers that he discovered and nurtured (like David E. Kelley and David Milch).  I’m among his biggest fans, speaking both as an appreciative viewer and a TV writer/producer who was inspired by him (and yet never rose to anywhere near his level of success, creatively or otherwise). That said, while there is much to learn from his revealing memoir, this self-published book is difficult to read, not because of the subject matter, but because of crippling editorial issues.

But let’s talk about the pluses first. The memoir works not just as the story of one writer’s rise through the television industry — from Universal Television staff writer to a celebrity show runner — but also as insider’s look at the massive changes that have happened in the industry and how it has affected programing. It’s also an in depth, inside look at how television shows are conceived, developed, written, and produced from the creative, business and political sides. Bochco not only examines how his shows succeeded… but also how and why they failed. And he can be brutally honest about it.

He goes into detail about his working and personal relationships with actors, directors, network and studio executives…and doesn’t always come out looking very good himself (more about that later).  There are many memorable stories in the book — one of my favorites is the one about why he fired actor Daniel Benzali from Murder One. All I’ll say is that it comes down to when and where Benzali wanted to take a crap. Another favorite is the story of his encounter with William Paley, who ran CBS.  Those are just a few of the great anecdotes in book that, as far as I know, haven’t been shared before. But Bochco also goes into more well-known controversies, like replacing David Caruso on NYPD Blue, and talks candidly about his intimate working and personal relationship with writer David Milch, who he discovered on Hill Street Blues and who battled with many demons, including a gambling addiction.

Now let’s go into the negatives, which are substantial and detract from what otherwise could have been a great book, perhaps one of the best ever written about the TV business.

The book is amateurishly produced on every level.  The title of the book, at least on the cover and on the spine, is Truth Is a Total Defense. The title of the book on the two title pages, however, is Truth is a Total Defense: My Fifty Years in Television. That’s a minor quibble, but it’s your first clue that this is not a professionally published book (it’s also missing a copyright page, which is pretty astonishing in itself).

Bochco is a very wealthy man, as he often mentions in the book. So I don’t understand why didn’t spend the money to have the book professionally edited. For a guy who prides himself on his attention to detail in his shows, he doesn’t exhibit the same care when it comes to his book. He appears to have done little or no copyediting.  For example, titles of shows are not italicized or in quotation marks… though sometimes, for no reason at all, they are in all-caps. It’s a very strange choice and makes it difficult to read the book.

Typos and other errors abound. He refers to John Wells, executive producer of ER as “John Welles.” He even misspells the names of characters he created, alternating between “Goldblume” and “Goldbloom” when talking about the character from Hill Street Blues.

There are also a lot of factual mistakes. For instance, Bochco was a story editor on McMillan and Wife, which he describes as Rock Hudson playing “the D.A. of San Francisco” when, in fact, he played the Chief of Police.  He mentions releasing David Caruso from a clause in his post-NYPD Blue agreement, one that prevented him from doing another series for five years, to let him do a CBS pilot. He says the CBS pilot didn’t sell, but that the next show Caruso did was CSI Miami, and it was a big success. Actually, the CBS pilot did sell. It was called Michael Hayes, and the series ran for 21 episodes before being cancelled.  There are errors like this throughout the book that could have been easily avoided if he’d hired a professional copy editor.

There’s also an interesting omission. He talks about nearly every show he worked on at Universal Television… and says the first show he ever created was Griff in 1973. And yet he never mentions that in 1969 he co-created The New Doctors segment of The Bold Ones, the most successful series spoke in that drama wheel.  I wonder why he completely skipped over that.

He does something in the book he would never do on his TV shows — he uses lots of cliches, like “moved so fast our heads were spinning,” “it was no day at the beach,” “I didn’t want to rock the boat,” “necessity is the mother of invention,” etc.  It’s laziness he would never tolerate in a script but lets slide in the book. I mention it not to be petty, but because its a sharp contrast to what he says throughout the book about his standards of good writing.

Structurally, the book is mess. He starts with the moment, a few years ago, that he learned that he had leukemia, and then goes into his disappoint and anger that his sister wouldn’t donate bone marrow.  From there, he shifts into the story of his TV career, jumping forward, backwards, and sideways so it’s often hard to keep track of where you are in his career and personal timeline. And then he returns to his leukemia, and his difficult battle over the disease. As part of that story, he shared the emails he wrote to his family and friends while he was being treated…some of them cringe-inducing, particularly those where he rips his sister yet again for not giving her bone marrow to him.  Is this his autobiography? A book about his career in television? Or a book about his battle with leukemia? He can’t seem to decide.  This is where a strong editor would have really helped the book.

He likes to depict himself as a nice guy, someone who is supportive of other writers and who strives to bring out the best in everyone around him. Often, he probably is the person he describes…and there are plenty of examples of that kindness and supportiveness in the book.  But he also clearly delights in trashing people, particularly network and studio executives, some of them by name, who had the temerity to disagree with him or pass along notes from their bosses. Many of the people he trashes are small fish, individuals far less powerful and wealthy than he is….and, as a result, he comes across as a bully taking advantage of his stature to beat on those who aren’t able to defend themselves.

He repeatedly claims he doesn’t carry a grudges, but he clearly does. He rips into his first wife’s boyfriend, actors Kiel Martin, Daniel J. Travanti, and Daniel Benzali, writers Mike Kozoll (co-creator of Hill Street Blues), Terry Louise Fisher (co-creator of L.A. Law), Eric Lodel (co-creator of Murder in the First) and David Milch (co-creator of NYPD Blue) to name just a few of the people who get singled out for his righteous and often brutal wrath. Some of them undoubtedly deserve his harsh words, and this is his memoir after all, but he doesn’t come out looking particularly good himself in many of these stories. He also repeatedly savages, perhaps rightfully so, his sister for not donating bone marrow to him when he needed it (also trashing her husband, actor Alan Rachins, in what can best be described as collateral damage).

So when all is said and done, yes, Truth is a Total Defense, is a fascinating book for anyone interested in Steven Bochco and the business of television. There’s is much to learn from the book about writing, show running, and the television business. But it’s also a deeply flawed work that’s in desperate need of professional editing.