I have a huge collection of  TV series boxed set DVDs. I am particularly fascinated by short-lived TV series… bombs like FUTURE COP, CHOPPER ONE, CORONET BLUE, THE OREGON TRAIL, THE MAGICIAN, THE YOUNG LAWYERS, and SPENCERS PILOTS are just a few of the failed series in my collection. Here are a few recent additions: 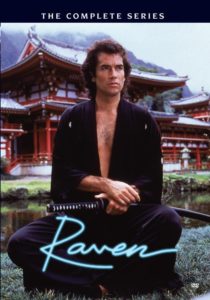 RAVEN: The Complete Series – This show is very much an artifact of its time and is heavily influenced by previous TV hits written, created & produced by Stephen J. Cannell (ROCKFORD, A-TEAM etc) and Glen A. Larson (MAGNUM PI, SWITCH)…which is no surprise, since RAVEN writer/creator Frank Lupo worked for them both for many years. Jeffrey Meek was a white ninja looking for his lost son and helping people in trouble in Hawaii. He was aided in his search, and his do-goodery, by his Army buddy “Ski,” played by Lee Majors. RAVEN is pure, escapist fun that doesn’t take itself too seriously (in fact, its much better than I remembered it). Majors pretty much stole the show from Meek, which wasn’t too hard. Meek was likeable, and a talented martial artist, but didn’t have much charisma. Nobody would mistake him for the next Tom Selleck, James Garner, or even Lee Majors (in his glory days). Even so, I’m surprised the series didn’t last longer…perhaps it was a matter of timing, hitting the scene just as this style of television was becoming dated and stale (at least for the time being). This was Meek’s second attempt at TV stardom (having previously starred in the short-lived latenight series THE EXILE) and would have one more failed shot (MORTAL COMBAT) before the networks gave up on him as a series lead. The kitschy main title sequence and Christopher Franke’s theme truly capture the flavor of the show. 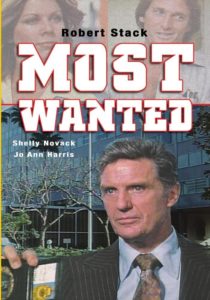 MOST WANTED: The Complete Series – I had to buy this. I am a sucker for any series Quinn Martin produced, especially the really obscure ones (I can’t wait for A MAN CALLED SLOANE, CARIBE, BERT D’ANGELO: SUPERSTAR, and BANYON to come to DVD. How pathetic does that make me?). Robert Stack didn’t show a lot of range on television. He played the leader of an elite crime fighting force in three series (THE UNTOUCHABLES, MOST WANTED, and STRIKE FORCE) and a crime reporter in another (THE NAME OF THE GAME). MOST WANTED, which aired on ABC in 1975, is easily the worst of Stack’s four TV series and assembly-line Quinn Martin fare — in fact, the police station set is identical to the one in THE STREETS OF SAN FRANCISCO. By far the best thing about the show is Lalo Schifrin’s terrific theme…and the most interesting aspect of the show is how the main title sequence changed between the one used for first two episodes and the one used for the rest of the short-lived series — the action sequences in the first one were replaced by shots of Stack awkwardly attempting to smile. Still, as bad as the show is creatively (and perhaps explicitly because of it), I enjoyed the set, which says a lot, given how technically awful the transfers are.  I realize CBS isn’t going to spend the money to digitally remaster prints for a set like this, which appeals to a very narrow niche of customers. That said, I wish the studio would still put a little effort into it and find prints that weren’t run through sand paper before being transferred. The image clarity, color levels, and sound quality are wildly uneven/inconsistent from one episode to another. It’s as if they just slapped this together in an afternoon. The studio could have taken more care and produced a quality product. 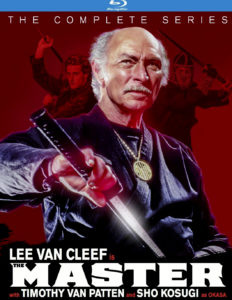 THE MASTER: The Complete Series – For some reason, I had fond memories of this show…which is why I bought the set. What was I thinking!? The show itself is absolutely awful by just about every measure. Lee Van Cleef doesn’t even bother to act, seemingly reading lines off some distant cue card and repeating the words as if English was his second, or perhaps third, language and doesn’t understand what he is saying. The scripts are terrible. The direction is perfunctory. The martial arts sequences are poorly staged and edited…it’s laughably obvious when Van Cleef steps out and the stunt man steps in. Bill Conti’s music is a rehash of his FOR YOUR EYES ONLY score. It’s easy to see why this show bombed. Oh, I forgot to mention the concept. Van Cleef is a white ninja searching for his long lost daughter. He is aided in his do-goodery by Max (Timothy Van Patten), wise cracking kid tooling around the country in what look like Scooby Doo’s van. The DVD set itself is exceptionally well-produced with pristine picture and sound. 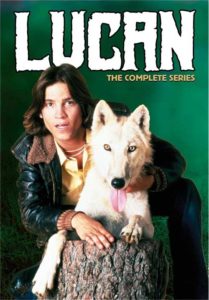 LUCAN: The Complete Series – I didn’t buy this set because I was LUCAN fan (though I did  fondly remember composer Fred Karlin’s theme, which was only used in the pilot and first episode. I had it on a cassette tape). It’s one of those wonderfully awful, totally deriviative series from the 1970s that inexplicably fascinate me. LUCAN only lasted for 13 sporadically aired episodes and, to my knowledge, has never been rerun. The pilot starred Kevin Brophy as a man who was raised by wolves…and ends with him setting off to wander the country in search of his parents and, spirtually, himself. Sort of ROUTE 66 meets TARZAN…and is every bit as awful as it sounds. That quickly changed…the concept, that is…and the show became steadily worse throughout its short run.  In fact, the most memorable thing about the show was how often the format changed. After the second episode, there’s a new theme by JJ Johnson and now authorities, concerned Lucan might “revert to wolf,” have hired a bounty hunter to track him down and imprison him. And four episodes later, the concept changed again...now the bounty hunter had inexplicably become a cop and Lucan was being pursued for a murder he didn’t commit. It became a poor man’s THE FUGITIVE with a touch of THE INCREDIBLE HULK thrown in (THE PHOENIX, HOT PURSUIT, STARMAN and a dozen other short-lived series of the 70s and 80s also had the same, basic premise and were just as awful).