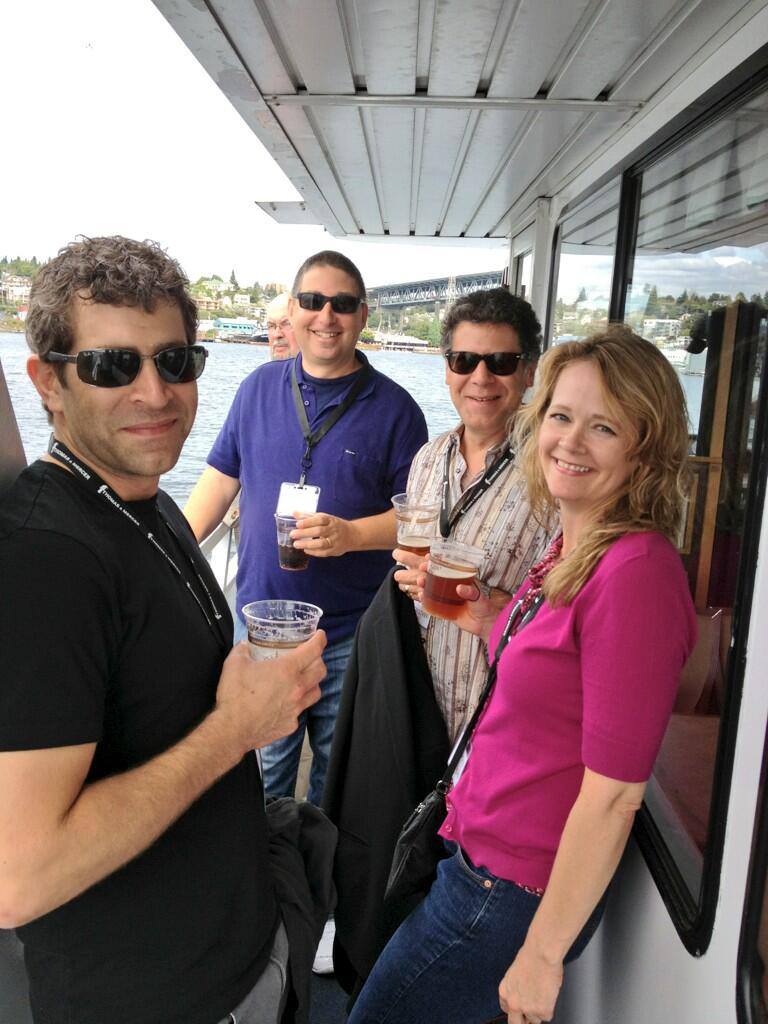 Amazon’s Thomas & Mercer imprint brought their authors up to Seattle last weekend to meet with their executives and editors over dinners, parties and meetings…..and to talk shop at a conference entitled “On The Lam” that was open to invited members of the public. It was an amazing experience.

The best thing about  the “On the Lam” conference were the numerous, and lengthy, opportunities we had to meet, and spend time with, the Amazon executives and editors. It gave us a real chance to develop personal relationships with them rather than the typical short encounters you have at Bouchercon, etc.

The first full day began with a breakfast meeting at Amazon HQ where the heads of their various departments gave us confidential briefings on the current status on all aspects of the Amazon Publishing program and the many initiatives they have in the works for the coming year. It was very interesting and I wish I could share the details…but we were sworn to secrecy. We were introduced to key department heads and went off to lunch aboard a yacht in Lake Union, where we got a chance to mingle with the execs one-on-one in a casual setting. We then broke up into groups for an afternoon cruise , a walking tour of the city , or a tour Seattle distillery tour. After the afternoon outings, we got back together for a terrific party at the Chihuly Glass Museum at the base of the Space Needle. There were a number of inspiring, short speeches by Amazon execs…and then we all mingled.

Saturday was spent in the “On the Lam” conference, where the authors in attendance were on panels moderated by Amazon editors and discussed many aspects of writing, marketing and the publishing business. The conference concluded with the authors breaking into several groups and going to dinners hosted by editors at some of Seattle’s best restaurants.

A lot of the authors and attendees have blogged enthusiastically about their experience at “On The Lam.” Author Max Allan Collins says the event was truly unprecedented:

[It]was unlike anything I’ve experienced in forty years of publishing. The T & M crew flew in 75 authors from hither and yon – “yon” being the UK, and hither being places like “Iowa” – simply to give those authors a chance to interact with each other, and the T & M editorial and marketing team. Editors have taken me out for lunch or breakfast many times, and publishers often have cocktail parties at Bouchercon and/or take authors out for a group dinner. But this was different.

For one thing, this conference was almost exclusively attended by one publisher’s writers. For the Saturday panels, family and friends and some local writers group members were in the audience, but mostly this was writers talking to other writers (and to editors). All weekend, the kinds of conversations usually only heard in secluded corners of bars at Bouchercon hotels was the up-front order of the day.

Barb and I both found it interesting and illuminating, and the generosity of T & M toward their authors was damn near mind-boggling. Everybody had a gift bag with a Kindle Paperwhite in it, for example…

The freebies went beyond that. There were t-shirts, notebooks, pens, umbrellas, and plenty of copies of the T&M books. Our money was no good at the restaurants and bars in the hotel. But it wasn’t the swag or meals that impressed me… it was the message that the gifts, and the event, underscored about Amazon’s attitude towards their authors: we appreciate you. We are in this together.

Author Christine Kling blogged about it on day one of the conference:

I guess you could say that in the 21st century with the advent (invent) of the Kindle, traditional publishing has come under siege. There is a war going on for eyeballs on screens. Authors are the ones who produce much that content that goes on the screens. It sometimes seems like the legacy publishers have forgotten that, but this is something that Amazon knows at the core of their corporate structure. I’ve been here 24 hours now and all I hear (and see) is how Amazon puts the author at the center of all business equations.

[…] all the talk among the authors was about how we, as authors, have never been treated so well by a publisher. They really want our opinions on covers, and when we say we think there should be changes, they go back to the drawing board and try again. They pay better royalties and they do so monthly. We have an online dashboard where we can see actual sales by the next day, so we always know how many books we’ve sold, and our final royalty statements are available online about fifteen days after the close of the month’s period.

Author Charlie Williams notes how lots of people like to depict Amazon as an evil empire …but that’s not how the company feels to authors or to customers.

You may have heard negative things about them, things about monopolies and doing the independents out of business and destroying the publishing industry. Well, all I can say is that they know how to treat an author. And if they treat you well too, dear reader, then that’s a pretty good deal. Right? See them as the dark overlord if you like, but I can assure you that they are a bunch of bright, imaginative men and women trying to find new and better ways of doing things. And they are book people. There is a new paradigm going on and they are at the heart of it, cutting unseen shapes from the rock-face. Lucky them. Lucky you.

Author Helen Smith says On the Lam was good business, for Amazon and for authors:

The conference made author Jay Stringer give serious thought to why he writes…and the direction his career is going.

I’m three books into my career. I’m still figuring out what kind of writer I want to be. At On The Lam I got to talk to many different kinds of writer. Some have forged successful careers mixing their own work with work-for-hire, some like to sit and slowly work through their own books, one at a time, and supplement their income elsewhere. Some have long-term deals, some only worry about one contract at a time. Each of them took time to talk to me about their careers, their paths, and to help me along in deciding on mine.

“On The Lam” was even great for the attendees who weren’t Amazon authors. Erin Havel reports for the Huffington Post that she found the panel discussions packed with information…

By the end of the day I was completely inspired. I realize I could write a separate blog on each of the panel discussions, perhaps I will in the future. However, for now, this is a small glimpse at a world few beginning authors have the opportunity to see. Thank you Thomas and Mercer!

Amazon has worked very hard to make their authors feel like partners, not like outside contractors or, worse, as a necessary evil (remember Harlequin complaining a few weeks back that their profits are down because they have to pay royalties to authors?).  I certainly can’t recall any publisher doing anything like “On the Lam” before…or being so open about sharing sales information (in real time!) or paying royalties so frequently and promptly (monthly!).

It’s very important to me to establish personal relationships with the people I work with.  The “On the Lam” conference is just one of many examples that demonstrate that the executives at Amazon Publishing feel the same way.