Today I was on a panel with Steve Cannell, Harley Jane Kozak, Dr. D.P. Lyle and my brother Tod at the spectacular Cerritos Library for their annual "Mystery on the Menu" program. It was my first time there and I was stunned by the library — it looks like Rick Caruso (developer of The Grove) and the Disney Imagineers teamed up to design the place. I have never seen anything like it, so rather than describe it, you can look at it for yourself here in 360 degree views. The visit to the library alone was well worth the trip. I had a great time, and caught up with Kirk Russell, Richard Greer, Patricia Smiley, Jerrilyn Farmer and Earlene Fowler, among other authors.

The "Murder on the Menu" program is a lot like the "Men of Mystery" event…each author is at a table with ten guests and does a "table talk" at lunch, giving the attendees a chance to get up-close-and-personal with the authors. I had some really interesting discussions with a lot of bright and creative people. But I also had more than my share of strange encounters.

"I love your books," one woman said.

"They are so relaxing," she said. "And they really help my digestion."

I think I am going to put that on the cover of my next book. It’s the best comment I’ve had since the San Francisco Chronicle called my book UNSOLD TV PILOTS "The best bathroom reading ever."

Another woman picked up one of my books and asked:

"No," I said. "It’s awful. I wrote it while I was trying to kick my heroin addiction." 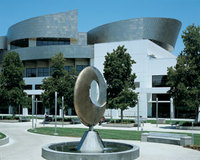 "Then why did you say that?"

"Well," she said. "I was hoping for your honest opinion."

Not one minute later, another woman (the audience was 99 % women) picked up one of my books and asked me:

"How much did it cost you to publish this?"

"Really?" she asked. "What about the other authors? What did they pay?"

"Is that something new?"

"I thought everybody had to pay," she said.

I quickly educated her in how  the business works. And after my long speech, she nodded and asked.

"How much did it cost you to get an agent?"

A woman at my able bought Doug Lyle’s excellent FORENSICS FOR DUMMIES book and asked me:

"How did he get away with calling his book FORENSICS FOR DUMMIES without getting sued by the DUMMIES people?"

"They were the ones who hired him to write the book," I said.

But I think the best question I got asked came from a woman at my table who said she’d been writing novels for years but hadn’t had any luck getting them published and wanted my advice.

"I write them by hand in spiral-bound notebooks," she said. "I have written a dozen novels."

"And then what do you do with them?"

I looked at her. "You haven’t sent them to any publishers?"

She shook her head.

"You haven’t written any query letters to agents or publishers?"

She shook her head again.

"So how do you expect them to get published?"

"Did you think someone was just going to knock on your door one day and ask if you have any novels written on spiral notebooks that he can read?"

She shrugged again. "That’s the part I was hoping you could clear up for me."

I haven’t compared notes yet with Tod to see what strange conversations he had, but I’m sure he’ll blog about it if he had any…

3 thoughts on “Who Needs Tums? Read My Books Instead”