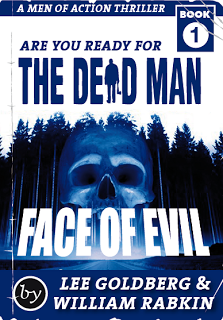 The folks over at the Permission to Kill (one of our favorite blogs, by the way), get exactly what we are trying to do with THE DEAD MAN series. They say, in part: 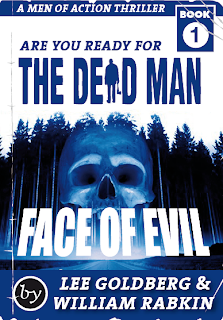 The old ‘Men of Action’ books are all but extinct now – of course you can find them in second hand shops, but possibly younger generations have replaced them with video games, which provide them with more immediately thrills. I for one, kind of miss them. But it seems that I am not alone. Thankfully, a group of talented authors are coming together in a project aimed at reviving the spirit of the ‘Men of Action’ books in a new e-book series. The series is called The Dead Man, and the first book is Face of Evil written by Lee Goldberg and William Rabkin. But this new series isn’t just retreading old ground, or presenting more of the same. The story tellers have added a paranormal, horror element into the mix. SoFace of Evil presents a story in a style that you may be familiar with, but mixed with some other elements to bring the reader something new.

The enjoyment, most evident in the in-jokes, is palpable when reading the story. […]Face of Evil is only a novella, around 80 pages, which creates its own little duel edged sword. In many ways, I was happy that it was short, as the twists had me eager to know whats happens next. Therefore, I could finish the book in one sitting, rather than pressing on into the wee small hours and turning up to work bleary eyed the next morning. On the flip slide, I was enjoying it so much, I didn’t want it to end so abruptly. I guess I have to wait for the next installment in The Dead Man series

They were so enthusiastic about the book, they even did their own retro take on the cover, making it look like a well-worn "men's action adventure" paperback from the 1980s (pictured above). We hope we live up to their high expectations for the series.

1 thought on “Men of Action”