The memorial for Stephen J. Cannell was held today in Pasadena and it was a moving, funny, and heartfelt event that was perfectly in keeping with his personality and approach to life. The church was packed with family and friends, network & studio executives, actors & writers… and probably anybody who ever was lucky enough to work with Steve.  The stories told during the memorial shared a common theme — that Steve Cannell was an incredibly nice, giving and honorable guy in a business that has far too few of them. I certainly owe a lot to him.

The reception afterwards was truly a festive and upbeat celebration of Steve's life.

I spent hours catching up with lots of old friends that I hadn't seen in years…and some I haven't seen enough of lately…. it's unfortunate that it was Steve's death that had to bring us all together again. Everyone I spoke to seemed to have a favorite anecdote to share about Steve that revealed his humor and his heart, his talent and his loyalty. 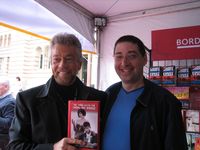 Someone at the memorial — I can't remember who — described Steve as larger-than-life. And it's true. He was a character every bit as colorful, endearing, and legendary as the ones he created on the page and on screen. I like to think that his influence, his decency, and his humor lives on in through everybody who was lucky enough to have known him.

(Pictured: Steve with my Mom, Jan Curran, at an author's event in Ventura last year and Steve and me signing together at the Los Angeles Times Festival of Books a few years ago).