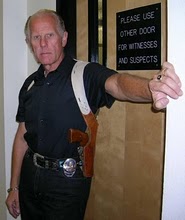 Back when I was a teenager writing my .357 VIGILANTE books as "Ian Ludlow," my publisher thought it would be nice if I met some of their other writers who lived in my area. One of'em was "Pike Bishop,"  who was writing the DIAMONDBACK westerns.

So they set us up on a lunch.

Imagine my surprise when "Pike Bishop" turned out to be uniformed cop Paul Bishop...and imagine his surprise when "Ian Ludlow" turned to be, well, me…who was then a very geeky teenager.

But that lunch started a friendship that has endured for nearly thirty years (OH MY GOD, thirty years!?). In that time, Paul has become a highly decorated LAPD detective (twice named homicide detective of the year), nationally acknowledged interrogation expert, an acclaimed crime novelist (CITADEL RUN, TWICE DEAD, etc), and a TV writer (among his credits, three DIAGNOSIS MURDER scripts that he wrote for Bill Rabkin & me).

Now Paul can add another accomplishment to his list: TV STAR.

He's the star of ABC's new summer reality/game TAKE THE MONEY AND RUN, from hitmakers Jerry Bruckheimer & Bertram van Munster, the team behind THE AMAZING RACE. Here's the description from the press release:

"Combining all the elements of an edge-of-your-seat spy thriller with the excitement of rooting for real people in different locales trying to outwit legitimate professionals, "Take the Money and Run" is an exhilarating competition series that will take reality television to a whole new level. The cat and mouse format will pit everyday people against real life law enforcement for a $100,000 prize."

The series premieres on August 2nd…and I, for one, can't wait.