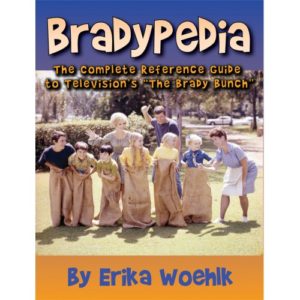 The Bradypedia: The Complete Reference Guide to Television’s The Brady Bunch by Erika Woehlk. There have been dozens of books written about The Brady Bunch and its many sequels, spin-offs, and reboots. This one is not the best and it’s not the worst. I’d say it falls somewhere in the middle. The bulk of the book is an episode guide to the Bradyverse… with plot descriptions of every episode of every Brady program that starred the original cast, a list that includes  The Brady Bunch, The Brady Kids, The Brady Bunch Variety Show, The Brady Brides, the reunion movies, and the misguided The Bradys drama. There’s also a “character encyclopedia” with descriptions of every character who ever appeared in the shows, biographies of the core cast, and a catalog of all the Brady Bunch songs & records (as well as other memorabilia). As far as providing new information, there’s not a whole lot beyond general trivia, at least when it comes to the production, writing, directing, etc. of the various series. Nor is there much in the way of interviews to provide an inside perspective. There are some interesting projects touched on in the section about unproduced spin-offs and continuations…but that’s also where you’ll find a big error. The author states that the proposed spin-off “Kelly’s Kids,” which aired as a last season episode of The Brady Bunch, “never came to fruition” as a series beyond the pilot. She’s wrong. Many years after The Brady Bunch ended, “Kelly’s Kids” became the CBS series Together We Stand. Writer/producer Sherwood Schwartz, the creator of The Brady Bunch, talked about it at length in an interview with me…and in many other press interviews… and it’s always been common knowledge among Brady fans and followers of his career. I’m surprised that the author is unaware of it (in fact, it’s covered in detail in one of the books that I review below). That quibble aside, the book is a handy, worthwhile resource for Brady fans.

Single Season Sitcoms of the 1980s 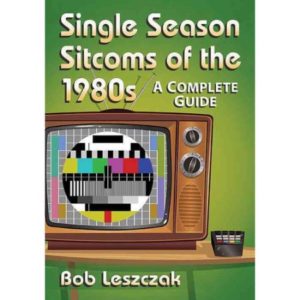 and Single Season Sitcoms 1948-1979, both by Bob Leszczak. I could swear that I reviewed Single Season Sitcoms 1948-1979 here when it came out in 2012, but since I can’t find the review, and just in case I never actually reviewed it, let me just say that I loved it. It’s one of my favorite TV reference books. Like the title says, it focuses on comedies that didn’t survive to celebrate a second birthday, a TV niche so obscure that it’s irresistable to me. I hoped, but never expected, that Leszczak would do a sequel. I’m delighted to say that I was wrong. Leszczak has returned with the marvelous Single Season Sitcoms of the 1980s…but the book is so much more than the straight-forward title suggests (though I would have been satisfied with just what the title promises). Yes, it’s a encyclopedia of every single-season sitcom of the decade…and provides all the rich details you could hope for (cast and crew, synopsis, air dates, episode titles)… but there’s so much more. The book is full of interviews with actors and key creative personnel (writers, producers, directors) who give us the surprisingly candid, inside scoop on the development, production and demise of the shows.

Baby Boom producer Charles Shyer shares, for example, that it was hell working with star Kate Jackson. “Things got so tense that Kate quit and flew to Aspen. The studio begged us to cajole her back with balloons and flowers, but we weren’t going for it.” The feelings can go both ways. One of the actors on Hello Larry says that “yes, McLean Stevenson  was extremely difficult to work with. However, in light of the bad to mediocre scripts, I felt he was right.” 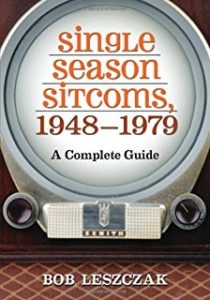 Hey, wait a minute, didn’t Hello Larry last two seasons? Yes, it did, which brings me to one of the great bonuses in this book. There’s a lengthy appendix entitled “Shows Invited Back for a Truncated or Vastly Different Second Season” that covers scores of comedies that returned for a second season (and in some cases many more seasons) in a very different form, either completely reformatted and/or recast. It’s like getting two books for the price of one. A good example of one such revamped series is Goodnight Miss Bliss, a comedy starring Hayley Mills as a school teacher, that was canceled after one season. The show returned with the students and  minus the teacher as the Saturday morning comedy Saved by the Bell and became a big success.

But wait, there’s more. Single Season Sitcoms of the 1980s also covers many one-hour shows with comedic elements, like Tenspeed and Brownshoe, Fitz & Bones, Foul Play, and Breaking Away to name a few. It’s all written in a breezy, immensely readable tone that only occasionally gets snarky (Of The Charmings, he wrote: “The setup for this series takes longer to explain than the program lasted..”)

I love this book even more than the first one. The only downside to these two terrific TV reference books is that you might get sticker shock when you go out to buy them. That’s because they are from McFarland & Company, a fine publishing company that caters to the library market, which is so narrow that they have to price their books high to make any money. The paperback edition of the first, 250 page volume is $45, which is absurd and unjustifiable outside of the library universe, and the price for the 272 page follow-up is $38, which is only slightly less ridiculous for the general consumer. But the good news is that you can get the Kindle editions of these books for $14 each, which is affordable and worth every penny.