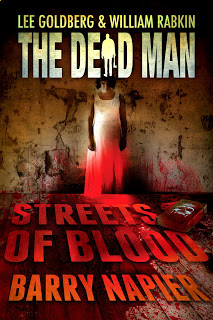 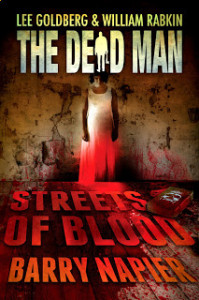 Author Barry Napier was the winner of the “You Can Write a DEAD MAN Novel” contest last year….and his book, THE DEAD MAN #18: STREETS OF BLOOD, has just been published by Amazon/47North. I’ve invited Barry to talk about his experience writing the book:

I won Amazon’s You Can Write a Dead Man Novel contest last year. The months between October – January were spent writing and editing it. If I’m being honest, I learned a lot from writing it, some of which I think most writers can either relate to or need to know.

First, Lee Goldberg and William Rabkin were very kind about pointing out a few of my flaws…flaws that have plagued me since writing my first short story at the age of 14. Among them…I’m too wordy. I tend to wax poetic when it’s not called for. I try to create back story that serves as a story in and of itself (this one, I will argue to my last breath, is often necessary and pivotal for longer works). When I try to write about someone collecting information or being smacked by insight, I tend to come off as too passive.

The great thing is that I have had these things pointed out by editors in the past. But with The Dead Man #18: Streets of Blood, these things were not only pointed out, but highlighted with blood and gore. Writing this book was perhaps my biggest lesson in reigning myself in when I wanted to get too wordy or experimental when it wasn’t called for.

This book was equally odd to write because of its content. It’s one of the bloodier things I have written in a while. When you consider the fact that I was writing a faith-based suspense novel at the same time, it was a very challenging and eye-opening few months.

So, while researching parts of scripture for the faith-based novel, I was also having to research old morbid nursery rhymes for my Dead Man book.

I’m not going to lie…it was sort of fun.

So again, a big thanks to Lee Goldberg for helping me through the process. It was an intensive course in writing short novels while helping me to further cripple some of the mistakes that I still wrestle with in my writing.