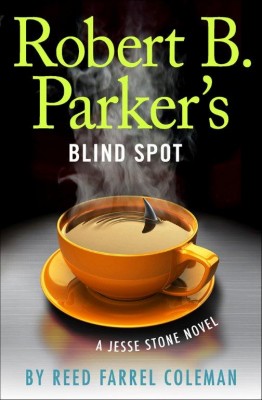 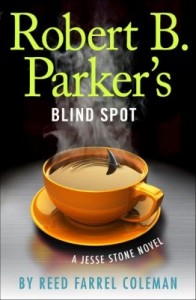 Here’s a guest post from my friend Kate Goldstone, a big fan in the UK of crime shows, crime novels and everything noir, who has just discovered Robert B. Parker’s Spenser novels (that’s me with Parker in the photo above at the Edgars). I envy her reading all of those great books for the first time…

Are you constantly on the look-out for the very best thriller books, from the pens of the finest thriller writers? If so, have you heard of Robert B. Parker, the ‘Dean of American Crime Fiction’? As a Brit, I hadn’t until recently, much to Lee Goldberg’s shock and disbelief.

Parker is best known for his remarkably popular Spenser private eye novels, which became the basis for two TV series (Spenser: For Hire and A Man Called Hawk) and even a bunch of well-loved made-for-TV movies. In fact, Lee broke into the TV business by writing four episodes of Spenser: For Hire, so he owes much of his career to Parker and the fictional private eye.

Robert B. Parker’s Lullaby was published in 2012, the first posthumous Spenser novel crafted by Atkins. Then came Wonderland in 2013 and the latest, released to considerable fanfare on 6th May, Cheap Shot.

If Parker’s work is new to you, an unexplored star in your crime fiction books firmament, you might like to find out a bit more about him and his work. If you’re into the best thriller authors, he’s an all-American classic. They aren’t just good thriller books. They’re great thriller books.

About Robert B. Parker – His Crime books and TV mystery series

Robert Brown Parker was known and respected for his epic, encyclopaedic knowledge of the city of Boston, Massachusetts. His crime novels are adored by readers, the great man’s fellow authors and critics alike, including stateside crime fiction luminaries like Robert Crais and Harlan Coben. In fact, they’re so good they’ve been cited as ‘reviving and changing’ the detective genre altogether. Big stuff… but then again Parker was a big writer in every sense of the word.

Robert B. Parker’s awards included two Edgar Awards from the Mystery Writers of America and, in 2002, Grand Master Award for his Lifetme Achievement in the crime writing field. There are currently forty Spenser novels in print, and you’ll find a list of them all here, on Wikipedia.

Ace Atkins is a popular New York Times bestselling author and Edgar Award nominee with fifteen runaway hit novels under his belt. As a journalist he was originally a newsroom crime reporter for the Tampa Tribune. His first novel was published when he was twenty seven and he threw in the journalistic towel completely at aged thirty to write crime fiction full time.

Ace won a Pulitzer Prize nomination for a TV series based on his investigation into a forgotten 1950s murder, which ultimately formed the core of his excellent novel White Shadow. He’s best known for his masterful grasp of plotting, totally believable characters and highly entertaining, seamless and convincing mix of fact and fiction. And, by all accounts, he’s also blessed with an uncanny gift for mimicking the late Robert B. Parker ‘s style, to the delight of Parker’s many millions of fans.

With a bit of luck the first three uncannily Parker-esque Spenser crime fiction novels will turn into a long run. Some things are just too good to come to an end. In the meantime, if you haven’t grabbed a copy of Cheap Shot yet, here’s what a few reviewers say about it on Amazon:

“Spenser is as tough and funny as ever, and Atkins has become a worthy successor.” – Booklist

“Assured… Atkins’s gift for mimicking the late Robert B. Parker could lead to a long run, to the delight of Spenser devotees.” – Publishers Weekly

“A well-conceived adventure that balances Spenser and friends’ experience with Akira’s innocence while drawing on Atkins’ own Auburn football days.” – Crimespree Magazine

“Cheap Shot is the best yet, with a whip-crack plot, plenty of intriguing and despicable characters, and the lovable, relentless Spenser at its center. Atkins also has a deft way with Parker’s style… Atkins is bringing his own energy and strengths to Parker’s series. Cheap Shot is Spenser, by the book.” – Tampa Bay Times